Android fans have spoken. The Move to iOS  Android app that was launched by Apple recently was received like a cold slap by Android users. Now an Android developer has come out with a hilarious reply by creating a ‘Stick with Android’ app.

A developer named Jonatthias released the app on Google Play Store and this is the app’s description:

“Everything about Android is designed to be easy. That includes sticking with it. With just one step, you can keep your content automatically and securely on your Android device with the Stay on Android app. No need to save your stuff elsewhere before staying on Android. The Stay on Android app securely keeps you away from switching to another (worse) platform.”

Clearly, the description wages an all out war to take down the apparently insulting Move to iOS app. The Stick with Android app doesn’t do much except show a single button on screen that says “Click here to stick with Android” which, when pressed, lets the user stick with Android. And it’s as simple as that. 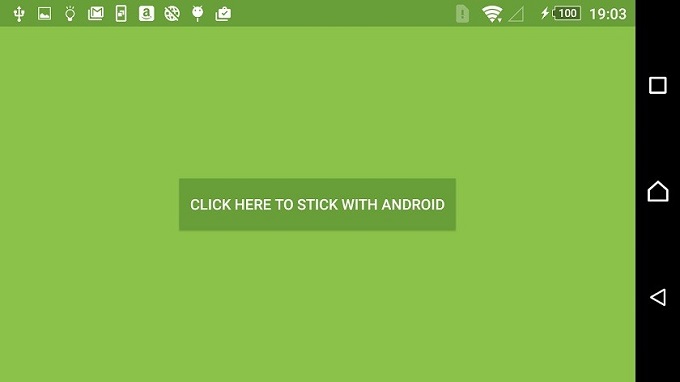 However, the hilarity does not end there. The app has an almost perfect 5 star rating in the Google Play Store whereas the Move to iOS app currently has a 1.8 rating, which is perhaps more to do with the existence of the app rather than the functionality of it. This practically useless app is one of the best rated Android apps at the Store.

As usual, the best part about an app like this is the user reviews. Click here if you want to download the app for a quick giggle. Sanket Vijay
When not indulging in reading or writing, Sanket fanboys over The Flash, Star Wars, Coldplay, and U2. And pizza, he loves his pizza. Follow him on Instagram for more.
You Might Also Like
AndroidiOSLatest
Read More