Xiaomi Mi 5 to Come with 5.7-inch Display and Glass Back

by Sushant TalwarFebruary 5, 2016
5
Now Reading
Xiaomi Mi 5 to Come with 5.7-inch Display and Glass Back
Browse This Page

The Chinese tech giant, Xiaomi is all set to unveil its next handset to global audiences on the 24th of this month, and as we near the launch date leaks and rumours regarding the phone are heating up. Details of the SoC on board have already been revealed by the company, but Xiaomi has decided to keep a tight lid on everything else about the handset. Latest leaked pictures of the phone reveal it to come with a glass back, something that had been widely reported for some time now, but what came as a surprise to us was that the previous leaks failed to reveal that this glass back would have a beautiful pattern running all over it. 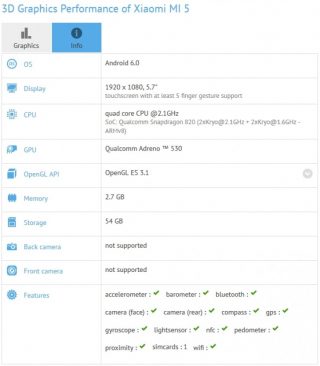 A new GFXbench listing though has revealed something not as welcome.  According to the report, the Xiaomi Mi 5 will have a 5.7-inch, 1080p display and will be powered by Qualcomm’s new Snapdragon 820 SoC. This contradicts the 5.5″ and 5.2″ size reports, as well as QHD resolution rumours that have been making rounds for the past couple of days.

The listing pegs the Mi 5 to come with 3GB RAM and 64GB for storage. No other variants are listed. Apart from this, the Xiaomi Mi5 will have a 16MP main shooter with f/2.2 aperture and an 8MP camera on the front. Other expected features include Bluetooth 4.0, GPS with GLONASS, Wi-Fi 802.11a/b/g/n/ac, BDS, OTG and NFC.