OnePlus 3 Drops to Rs. 18,999 As the Company Discontinues the Past Flagship Killer

by DevianaDecember 16, 2016
73
Now Reading
OnePlus 3 Drops to Rs. 18,999 As the Company Discontinues the Past Flagship Killer
Browse This Page UPDATE : It appears this is not an official OnePlus sale as confirmed by a tweet from Carl Pei (founder of OnePlus)

Flipkart has officially dropped the price to Rs. 18,999 and the sale will happen on 18th of December at 4PM. 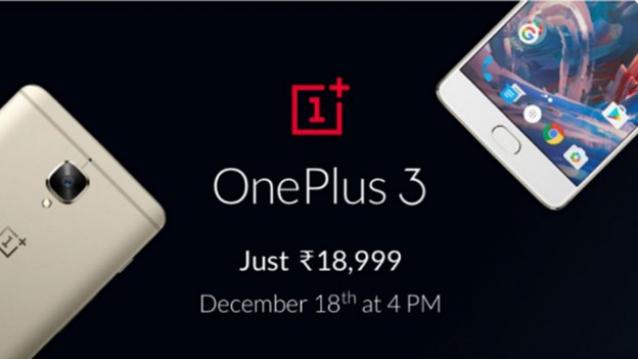 OnePlus has issued an official statement :

OnePlus is focused on creating premium flagship smartphones. We have an exclusive partnership with Amazon in India. We advice customers to purchase OnePlus products only through official channels as we cannot guarantee the authenticity of the products sold elsewher

The OnePlus 3 will be sold for Rs. 18,999 according to folks at Flipkart.com (Clickable Link) from 18th to 21st Dec in their sale. The OnePlus 3, which launched in the summer of 2016 features a 6GB RAM which set it apart from the competition along with top of the line specifications including the Qualcomm Snapdragon 820 chipset, and 64 GB storage.The OnePlus 3 will be available in limited quantities in India, as the phone has officially been discontinued and the company has stopped manufacturing the smartphone, with stocks still selling strong in countries like India.

Is the sale is a method of clearing stocks? Irrespective, this is obviously a fantastic deal for those looking to buy the phone and saving a good Rs. 9000 in the process. This will make the OnePlus 3 at Rs. 18,999 only for a few day. Post that only the OnePlus 3T will be available to purchase in either the 64 GB variant for Rs. 29,999 or the 128 GB variant for Rs. 34,999.