So far in 2017, Sony has launched some impressive premium devices as well as capable mid-rangers. The company has however, strayed away from the growing trends of thin bezel phones and dual cameras. It looks like Sony will give in to one of those trends with a smartphone which will have dual front facing cameras. 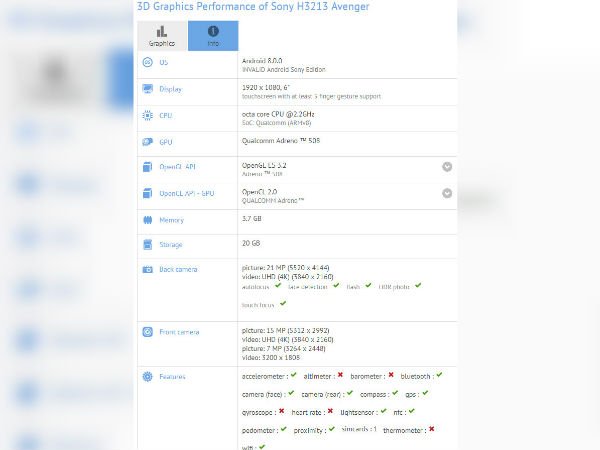 According to a GFXBench listing, the Sony phone with the model number Xperia H3213 Avenger will have dual cameras on the front of the device. The listing reveals that the new Sony will be equipped with a 16MP + 8MP camera setup. Front facing dual cameras are not as common but, recently there have been phones like the Honor 9i which also sport a similar setup. The front facing cameras will also record 4K videos. The back of the phone has a 21MP camera. Other specifications listed include a 6-inch display with a 1920 x 1080 px display. The resolution means that even though the phone will have a big display, it will not be a tall and bezel-less display.

Despite the dual camera setup, the Sony Xperia H3213 Avenger will not be a flagship smartphone. It has the Qualcomm Snapdragon 630 chipset, along with 4GB of RAM and 32GB onboard storage. It is safe to assume that the onboard storage will be expandable via microSD card.

There is no word from company that it is working on mid range smartphone with a dual camera setup at front so it is hard to know when the phone will be launched. The device will be an interesting entrant in the sub-20K category in India which already has some great devices like the Xiaomi Mi A1 and the Moto G5s Plus.