OPPO R13 Is The iPhone X Clone You Need The Apple iPhone X is the most expensive iPhone ever. In a country like India, buying the 256GB variant of the iPhone X can cost you over a lakh, which is not a small amount for a smartphone. Now, being the ‘trendsetter’ that Apple is, it has prompted OPPO to go the bezel-less route and embrace the “notch” life as well. 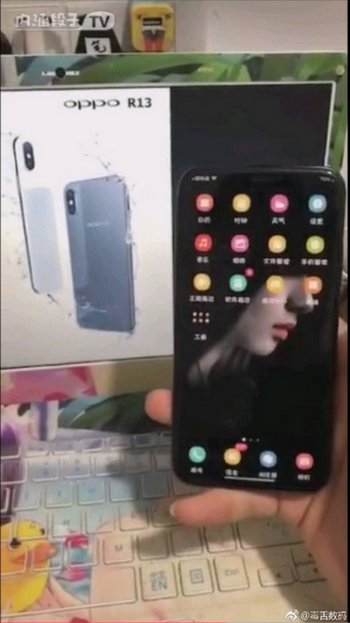 In new leaked images of the upcoming OPPO R13, the influence of the iPhone X is on full display. The OPPO R13 has been revealed to have a design way too similar to the iPhone X with a glass back, vertically placed dual cameras and a bezel-less display. According to a report, OPPO had filed a display patent back in September which showed an iPhone X-like notch on the top alongside a full-screen display. The leaked images certainly reveal the implementation of that patent as OPPO sets out to make an Android-powered iPhone X.

There is also a home bar at the bottom of the screen, just like the iPhone X. The iPhone X uses gestures for navigation within the OS since there is no home button due to shrunken bezels and, it appears that OPPO has done the same, even though, Android has had on-screen navigation buttons since eternity.

To recall, the OPPO R11 was also uncannily similar to the iPhone 7 Plus which became more famous because the OPPO R11 was the OnePlus 5 which resulted in comparisons. So, OPPO’s move is not surprising but, the company has gone all out this time. Face ID on the iPhone X

It is worth noting here that there is no fingerprint sensor visible in the photos. Now, either OPPO has housed the sensor in the lock button like the Razer Phone or, has its own version of Face ID. No word on specifications or release date of the phone has been revealed as of now.

Vipul Vij
Always found in a Hooded Shell, Excited by technology, tortured by his eating habits. Handles content at iGyaan.
You Might Also Like
LatestMobileOppoTech
Read More