Xiaomi is expected to launch the next iteration of its phablet series in mid-2018. The Xiaomi Mi Max and Mi Max 2 were great devices with a huge display and battery but, it looks like the upcoming Xiaomi Mi Max 3 will concentrate on more than just media consumption. In line with the previous leak, a new image has surfaced online which is believed to be of the Mi Max 3. While the image doesn’t reveal the front of the phone, the back of the device is clear as a day. It will have the same metal unibody build and a fingerprint sensor in the middle. However, that is not the interesting bit, as there appears to be a dual-camera setup on the back of the phone, a first for the ‘Mi Max’ series.

The image is similar to the one that was leaked a few days ago with a similar placed fingerprint sensor and cameras. However, the LED flash, is now placed to the left of the cameras as opposed to the right side in the previous image.

While the new leak doesn’t shed a lot of information on other aspects of the smartphone, we have a few key specifications of the device already, thanks to the previous leak. Under the hood, according to the image, it will be powered by the Qualcomm Snapdragon 635 chipset, have 3GB or 4GB of RAM along with 64GB or 128GB of onboard storage. 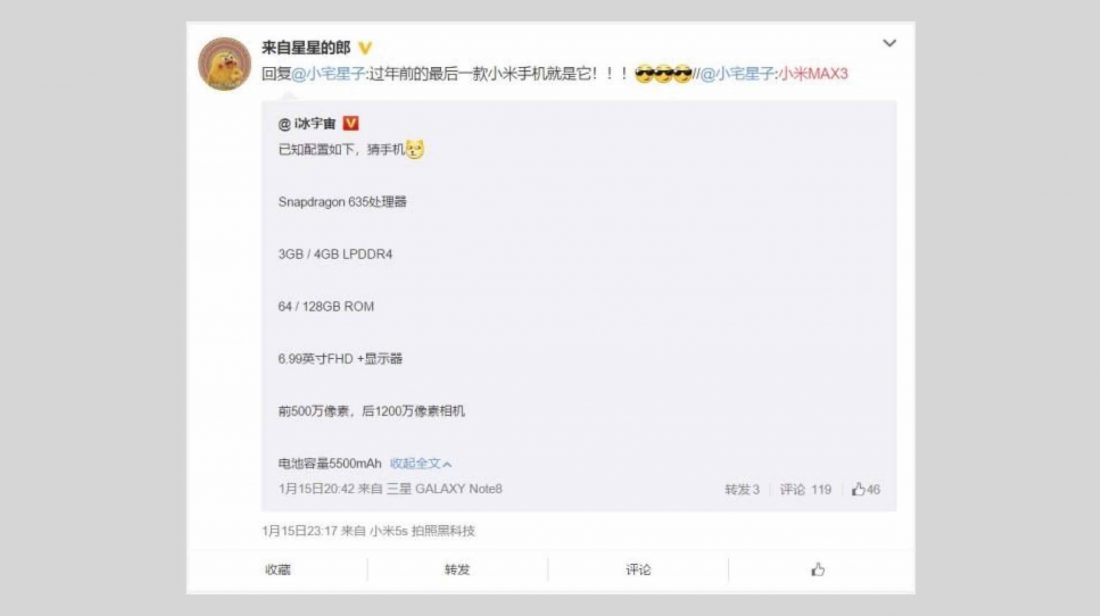 The smartphone will also be powered by a massive 5500 mAh battery. It will, in all probability, support some form quick charging, otherwise charging up a 5500 mAh battery on your primary device could be a pain.

While the front of the smartphone is not visible, it is possible that the smartphone will have an 18:9 display with thin bezels. Although this will soon be a norm for even the mid-range devices, thin bezels on such a large display might be cumbersome especially due to accidental touches. Xiaomi’s implementation will have to spot on if it goes for a modern looking bezel-less design for the Mi Max 3.