Samsung Galaxy A6 And Galaxy A6+ Display Specifications Leaked Samsung seems to be working towards an imminent launch of the 2018 Galaxy A6 and A6+ . The smartphones have been spotted on different certification boards in the past few weeks, unravelling most of their specifications. Now, a new leak has surfaced online which confirms the display size and type of these devices. The Samsung Galaxy A6 is expected to have a 5.6 inch display with 2220 x 1080 px resolution. However, the larger Samsung Galaxy A6+ has a 6.0 inch display with the same 2220 x 1080 px resolution.  Additionally, the leak also re-affirms the Exynos 7870 and the Qualcomm Snapdragon 625 chipsets used on these devices, which are in line with the previous leaks. However, take this information with a pinch of salt, as the benchmark mentions, that the phones, both have a pixel density of 441 ppi.

Considering previous Galaxy A series devices, these too, are likely to have a Super AMOLED screen with FHD+ resolution. In fact, the screen resolution does match with the Samsung Galaxy A8+, which was launched in India in 2017 and had a 6 inch 2220 x 1080 px resolution. The Samsung Galaxy A8+ currently retails in India for a price of Rs 28,990 and the A6+ and A6 are expected to be launched and priced in the same price range. These smartphones are expected to have an 18.5:9 aspect ratio display with a 2.5D curved glass protection. 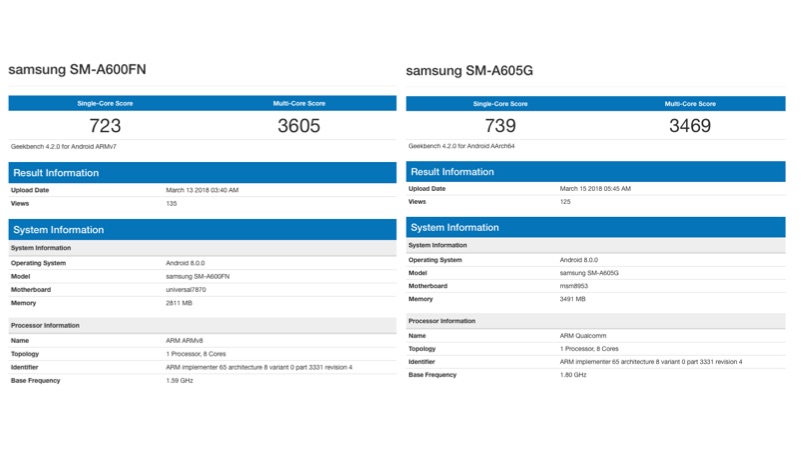 The Samsung Galaxy A6 with a model number SM-A600FN is expected to have the Exynos 7870 Octa-core chipset. Packed with 3GB RAM the Galaxy A6 is expected to have Android 8 Oreo out of the box.  The device scores 723 points on the single core and 3605 points on the multi-core performance on the Geeekbench benchmark leak. However, there is no information on the display resolution or aspect ratio of both models.

The Samsung Galaxy A6+ with a model number SM-A605G will run on Qualcomm Snapdragon 625 Octa-core chipset. The device gets a boost in RAM to 4GB RAM and the same storage at 32GB storage. The larger sibling is also expected to run on the latest Android 8 Oreo out of the box. The Galaxy A6+ scores marginally higher score on single core performance (739) and scores lower in the multi-core performance(3469). In fact, the phone scores 739 points on the single core and 3469 points on the multicore performance.