Leak after leak is just simple proof that the device is coming soon, the HTC Puccini is no secret to the interwebs. Now pocketnow has got some more screens of a device set to be launched on AT&T networks in the US and will be dubbed “Jetstream”. Three major specs include

This device will also have the HTC Scribe system used in the Flyer. It is also expected to launch with 4G LTE capable hardware in the US and 3G Plus in the rest of the world. The device is slotted for a winter release. 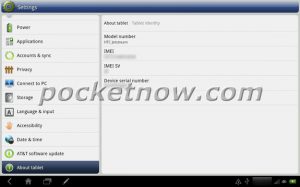