Why GoPro Failed And What It Needs To Change

by Souradeep RoyDecember 20, 2018
0
Now Reading
Why GoPro Failed And What It Needs To Change
Browse This Page

In today’s world of every growing technology and ideas, companies come and companies go. Most of them exit the scene as rapidly as they climbed the top of the ladder. GoPro is such a success story. Despite still having a relatively good footing in the market, it will be difficult for them to make a comeback unless they change their ways. Action cameras have been there for a while now and it all started with GoPro itself. In 2002 Nick Woodman went on a surfing trip and quickly realised that there was no way to take excellent quality photographs while in the water. While most photographers shooting surfing images usually used DSLR with long tele lenses from the beaches, buying these lenses and equipments and hiring photographers were an expensive affair. This led to the birth of the desire to shoot professional images in dire situations and adventure sports. Over the years, small improvements were made and the Digital HERO3 was released in 2007. It featured a 3-megapixel camera and shot standard definition 512×384 video. The latest GoPro, which is the Hero 7 shoots 4K images at 60 fps, came after several iterations of the HERO lineup. The cameras that were released between the Hero digital and Hero 7 were Digital, Digital 3, Digital 5, Digital Wide, HERO 2, HERO 3, HERO 3+, HERO5, HERO6, Fusion and HERO (2018). While the development and refining was constant and very smooth, the time taken to do it was not in their favour. But before we go into the reasons of the revolutionary company’s eventual failure in the market, let’s discuss why it succeeded in the first place.

GoPro was released at a time when cameras were bulky accessories that only photographers would buy. Yes, there were point and shoot cameras available, but these cameras were extremely brittle, untrustworthy and weren’t the greatest performers. In other words, they underperformed both in terms of image quality and build quality. Since Sony’s introduction of the world’s first ‘digital’ camera in 1981 called Mavica, there was very little in terms of research and development done in this sphere. While the DSLR technology was being improved with leaps and bounds, the compact camera segment was falling behind. Rangefinders were still in fashion and so was 35mm film. With little or no access to personal computers, the day to day consumer was more inclined towards having a film camera and saving printed positives. What set the GoPro 35mm Hero apart from the rest of the point and shoot cameras was its ruggedness. It was also quite famous for being small and handy. The camera measured in at just 2.5 x 3 inches (64 by 76 mm) and weighed a mere 0.45 pounds (200 grams). What you got with the camera was a clear case with quick release, a camera strap and a ski glove adapter lash. It was functional in water to a depth of about 15 feet (5 m). The camera was marketed as a “reusable wrist camera” and included a roll of 24 exposure Kodak 400 film.

Many photographers as well as day to day users such as students on a spring break, travellers and family members were using it. People in the United States love water, be it surfing, diving, river cruise, beach holidays or just a simple day relaxing at the pool. The camera struck a chord with these users. For a time when cameras had to be taken extreme care of and maintained like a family jewel, this rugged camera with a case and waterproofing was an excellent choice. Another extremely important reason for the GoPro Hero 35mm’s success was its pricing. Priced at just $20, it was an extremely good deal for photo enthusiasts and families alike. 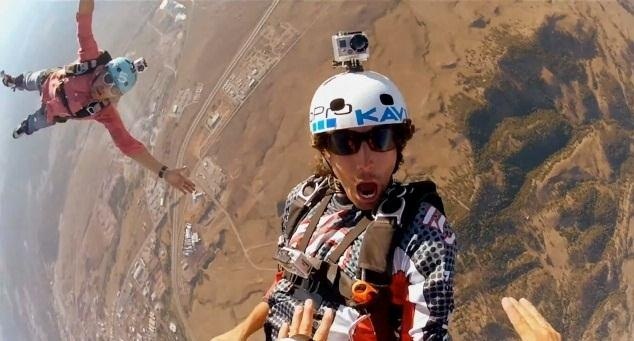 As time passed, the cameras became digital and so did people’s ways of interacting with technology. Everyone who was even slightly well off had a personal computer. At the Worldwide Developers Conference keynote address on June 6, 2005 which is a year before the first digital GoPro’s launch, Steve Jobs announced that Apple would begin producing Intel-based Mac computers in 2006. The world around GoPro changed and so GoPro changed along with it. They shifted to digital which was widely accepted by the people. But it also was a sign for future historians to look into since that was the last quantum leap that they took. At least till 2018, when this article is being written. Now that we have a basic idea of where GoPro was headed, let’s find out what led to the near shutdown of the industry leader.

GoPro was never doomed for failure. They had, what people in the industry call the first mover’s advantage in a segment in the photography and videography industry. A segment that they created themselves. Just as the word Xerox had become synonymous with Photocopier machines after the inventors named and trademarked their process under that name, action cameras were at one point known as GoPros. This was because they were for the longest time, the only players in the action camera market. So how did it all change? Their understanding of the market and industry needs to improve. Within a week of the GoPro Karma launch, DJI announced their own drone – the DJI Mavic Pro. The Mavic Pro was better in terms of features and specifications thus beating GoPro to their game. DJI created quality products at a competitive price. GoPro needs to reduce the prices of their accessories so that more people feel comfortable in investing in a GoPro ecosystem. GoPro badly needs to streamline their work and employees if they wish to stay afloat. New investors are also something they should look into, to keep the company afloat. GoPro needs to get a grip on the ‘Next big thing’ that may hit the market. This will give them a head start compared to Chinese companies who are always on the lookout for the same. They also need to start looking at and listening to customers. They need to market their products by tailoring specifically for consumers. The company has already started to do that through their Instagram account that accepts entries from users. They still need to unify their App ecosystem which now consists of the GoPro App which is 97Mb, Quik App which is 100Mb and Passenger 43Mb. It would be extremely useful if all the three apps were unified into one single app.

They also need to give developers more access to their hardware. This will enable customers to make their cameras more useful in their respective businesses by tweaking the firmware. All in all, GoPro needs to understand the pulse of the industry. They need to create a great marriage of hardware and software. Being user friendly and affordable will also factor in, if they wish to survive in the cut-throat market of technology.