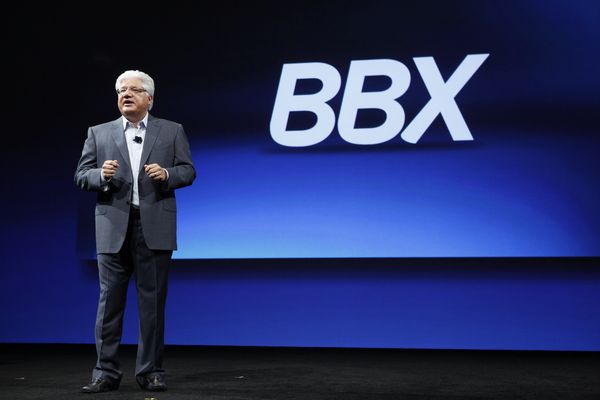 But while RIM made the next BlackBerry operating system official, the company offered up few details on the new software outside of how developers will be able to build for it. RIM hasn’t yet said when the first BBX smartphones will arrive.

“With nearly 5 million BlackBerry apps downloaded daily, our customers have made BlackBerry one of the most profitable platforms for developers,” said Mike Lazaridis, President and Co-CEO at RIM. “At DevCon today, we’re giving developers the tools they need to build richer applications and we’re providing direction on how to best develop their smartphone and tablet apps as the BlackBerry and QNX platforms converge into our next generation BBX platform.”

BBX is the next generation platform for BlackBerry smartphones and tablets. It combines the best of BlackBerry and the best of QNX and is designed from the ground up to enable the powerful real-time mobile experiences that distinguish BlackBerry products and services.

The BBX platform will include BBX-OS, and will support BlackBerry cloud services and development environments for both HTML5 and native developers. BBX will also support applications developed using any of the tools available today for the BlackBerry PlayBook – including Native SDK, Adobe AIR/Flash and WebWorks/HTML5, as well as the BlackBerry Runtime for Android Apps – on future BBX-based tablets and smartphones.

BBX will also include the new BlackBerry Cascades UI Framework for advanced graphics (shown for the first time today), and bring “Super App” capabilities to enable many advanced capabilities including deep integration between apps, always-on Push services, the BBM(TM) Social Platform, and much more.

The BlackBerry WebWorks APIs are supported by the Ripple Emulator, a standalone, high-fidelity browser-like emulation tool that allows developers to test and debug their applications on multiple platforms and devices without having to compile or launch simulators. Starting today the Ripple Emulator is available in beta and can also be downloaded from RIM’s WebWorks Developer site at: http://developer.blackberry.com/html5 .

RIM also announced today the immediate availability of the Native SDK for the BlackBerry PlayBook (1.0 gold release). The Native SDK allows developers to build high-performance, multi-threaded, native C/C++ applications and enables developers to create advanced 2D and 3D games and other apps with access to OpenGL ES 2.0 and Open AL, as well as device specific APIs. Applications developed with the Native SDK will run today on the BlackBerry PlayBook and will be forwardly compatible on BBX-based tablets and smartphones.

The Native SDK makes the development and porting of game applications to the BlackBerry PlayBook an extremely attractive proposition for developers. Well known game publishers, developers and major game engine companies have already started to bring their game titles and applications to the platform.

Scoreloop, the largest and fastest growing cross-platform social gaming ecosystem on mobile, is now available in beta for the Native SDK through BlackBerry(R) Beta Zone. The Scoreloop SDK provides everything a developer needs to easily integrate social capabilities into their native PlayBook applications and includes support for Leaderboards, Game Challenges, Awards & Achievements, and Player Profiles. Scoreloop’s fully customizable and cross-platform technology empowers developers to add as many or as few features as they want, from a simple leader-board to more extensive player achievements. It makes mobile games more social and profitable.

RIM today showcased BlackBerry Cascades, a rich user interface framework coming to a future release of the Native SDK. Cascades unleashes a new breed of design centric mobile applications and provides developers with an exceptional feature set for creating visually stunning interfaces with custom layouts, animations, effects and 3D graphics. These features, combined with a strong set of built-in core user interface components, will make it easy to build beautiful native applications with innovative user interfaces for the current BlackBerry PlayBook and future BBX-based tablets and smartphones. Cascades is scheduled to be made available in beta later this fall.

Adobe Flash enables developers to produce visually stunning, highly functional applications for the BlackBerry PlayBook that can integrate with the underlying OS and will be supported on future BBX-based tablets and smartphones.

The BlackBerry PlayBook now supports the recently announced Adobe AIR 3.0 runtime. Among the supported features are Encrypted Local Store that gives developers the ability to use the Advanced Encryption Standard (AES) to encrypt and securely store sensitive information on the device, as well as store passwords, keys or credit card information safely within the app; StageText that allows developers to take advantage of native text controls and the native interaction behaviors of those controls; Multitouch and Gestures built into applications to provide great usability; and more.

BlackBerry Runtime for Android Apps and the associated tools allow Android developers to easily expand their market to include BlackBerry PlayBook users, and hence increase their apps’ market potential.

RIM also announced the BlackBerry Open Source Initiative to port popular Open Source libraries to the BlackBerry PlayBook platform. Libraries already available include physics engines like Bullet Physics and Box2DX, scripting languages like Lua, multimedia libraries like OpenAL and SDL, gaming frameworks like Cocos2DX and general-purpose libraries like Boost and Qt. Also available under an Open Source license are a range of code samples that developers can use to get started quickly, as well as GamePlay, a new 3D native gaming framework.

RIM will continue to expand its involvement in the Open Source community to help increase developer productivity on the BlackBerry platforms. For more details on RIM’s Open Source activities, visit http://blackberry.github.com .

Bharat Nagpal
Founder and Chief Editor of iGyaan. Bharat likes to keep on top of technology ! Follow Him on Google Plus : Google+
You Might Also Like
Apps and SoftwareBlackberryLatestMobile
Read More