by AdityaTDecember 8, 2011
1
Now Reading
Facebook for Android Gets a Facelift and Tweaks
Browse This Page 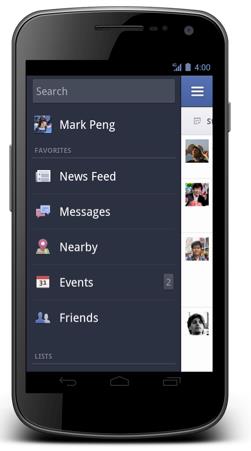 The new Facebook for Android app update, adds a whole lot of tweaks and and bunch of turbo speed boosts. According to Facebook :Photos and albums are up to two times faster than the previous Android app. It’s also easier to share photos, view comments and edit captions on the go. Your messages and notifications are now at the top of your screen. You can respond to friends and stay updated without leaving the page you’re on in Notification style. Just like the iOS App you can quickly access your News Feed, Groups, games and apps from the new left-hand menu.