Ford has released a new Fusion Hybrid Plugin for their 2013 model lineup. The lineup which will consist of the petrol, and petrol hybrid will also be greeted with this new plug-in hybrid. The car offers doubly improved efficiency vs standard petrol and hybrid engines. The Fusion Energi plug-in offers an efficiency  14 KMPe more than the Chevrolet Volt topping in at 100 MPGe.

Ford plans to sell these vehicles in India sometime at the end of 2013, for a very comfortable(!) 20 Lac. The car also features plus interiors along with 11 Airbags, SOny Sound system with integrated navmapping and surround stereo.

The Ford Fusion 2013 has undergone 180 validating crash tests to ensure optimum safety for its passengers. 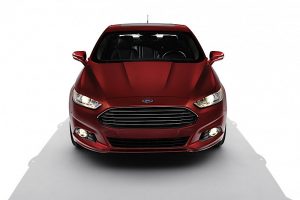 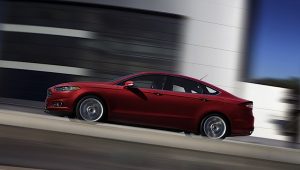 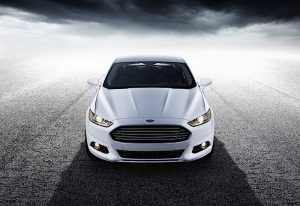 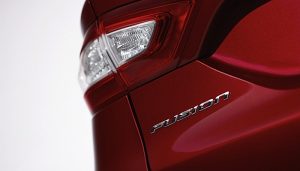 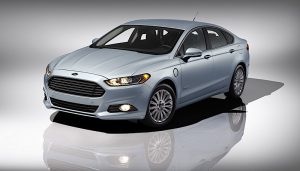 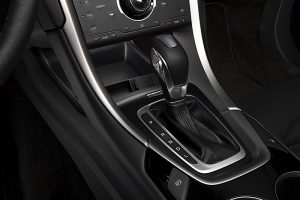 • Revealed in North America as the midsize Fusion sedan, this all-new car signals the next-generation Ford Mondeo for world markets

DETROIT, Jan. 9, 2012 – Ford’s all-new Fusion brings alive the next generation of more expressive vehicles from Ford and is the first sedan to offer gasoline, hybrid and plug-in hybrid versions – each expected to deliver top fuel economy and an engaging driving experience.

Featuring a sleek silhouette and fresh face, the all-new Fusion is the latest in a series of vehicles from Ford – following the 2011 Fiesta subcompact and 2012 Focus small cars – developed to satisfy customers everywhere looking for leading fuel efficiency, helpful technologies and game-changing looks.

“Our vision for Fusion was clear – deliver the very best of what ‘One Ford’ stands for,” said Derrick Kuzak, group vice president of Global Product Development. “We brought our global teams together around a blank slate with the charge to develop a midsize car with ground- breaking design and jaw-dropping fuel economy – one that featured technologies to help make our customers safer and better drivers. This car is the result.”

Fusion is revealed in North America in S, SE and range-topping Titanium series and points to the next Ford Mondeo for world markets.

For more information on the importance of the midsize car market, please follow this link: http://youtu.be/7C2ipp5A7gQ

Triple-crown fuel efficiency
New Fusion is expected to deliver best-in-class fuel economy across customers’ choice of gasoline, hybrid and plug-in hybrid sub-segments, delivering on Ford’s commitment to be the fuel-efficiency leader – or among the leaders – with each new model brought to market.
Fusion brings the broadest selection of fuel-efficient powertrains in the midsize car segment. It offers hybrid and plug-in hybrid alternatives, a pair of EcoBoost™ four-cylinder engines, a normally aspirated four-cylinder engine, an automatic start stop system to shut off the engine at stationary idle, front-wheel drive and all-wheel drive applications, and a choice between automatic and manually shifted six-speed transmissions.

The 1.6-liter EcoBoost is expected to deliver best-in-class four-cylinder non-hybrid fuel efficiency of 26 mpg in the city and 37 mpg on the highway. The 2.0-liter EcoBoost engine – paired with a paddle-shifted six-speed SelectShift Automatic™ transmission, available 19-inch wheels and tires and all-wheel drive with the ability to send additional torque to the rear – is the Fusion performance option.

The Fusion Hybrid – 2010 North American Car of the Year – continues to innovate and evolve with all-new lithium-ion batteries that save weight and generate more power than previous nickel-metal hydride batteries, while raising maximum speed under electric-only power from 47 mph to 62 mph.

Topping the fuel-efficiency ladder is the Fusion Energi plug-in hybrid, aiming to be the most fuel-efficient midsize car in the world. Arriving this fall, Fusion Energi is anticipated to deliver more than 100 MPGe, a mile per gallon equivalency metric for electrified vehicles. This is 8 MPGe more than the Chevrolet Volt and 13 MPGe more than the projected efficiency of the Toyota Prius plug-in hybrid model.

The next-generation Fusion 1.6-liter is the first automatic-transmission Ford product offered with an automatic start-stop system. It shuts off engine power smoothly when the car is stopped and seamlessly restarts as the driver releases the brake pedal, helping Fusion to reduce fuel consumption and emissions by approximately 3.5 percent.

Fusion looks out for you
The all-new Fusion offers an unprecedented portfolio of driver assistance and convenience technologies based on sensors, cameras and radar that enable the car to see and respond.

• Lane Keeping System: This class-exclusive technology consists of three elements to help a driver maintain proper lane position. Using a small, forward-facing camera behind the inside rearview mirror, the system “looks” down the road, monitoring lane lines to determine that the car is on course. The system will alert a driver if drowsiness or erratic lane-keeping is detected. The second element warns a driver with a steering wheel vibration if the Fusion drifts too close to lane markings. Finally, lane keeping aid will actually apply pressure on the steering to help bring the car back into proper lane position

• Active park assist: Employing sensors, this technology can identify a suitable parallel parking space, calculate the trajectory and steer the car to properly position it within the spot. All a driver need do is operate accelerator and brake pedals

• Blind Spot Information System (BLIS®) with cross-traffic alert: Sensors in both Fusion rear quarter-panels are able to detect traffic in a driver’s blind spot, providing both audible and visual warnings if traffic – unseen by the driver – is detected. BLIS technology enables cross-traffic alert, warning the driver of oncoming traffic when backing out of a parking space with obstructed views, such as between two large vans

The power of voice
The all-new Fusion offers the latest iteration of Ford’s award-winning, industry-exclusive SYNC® communications and entertainment system, which enables voice-activated communication through a driver’s mobile phone and interaction with the car’s audio system.

Fusion also offers the latest version of MyFord Touch®, allowing a driver to interact with vehicle systems through voice control, a touch screen tap or a conventional button.

Both SYNC and MyFord Touch – powered by SYNC – help reduce the potential for driver distraction through voice-controlled functionality, allowing drivers to keep hands on the wheel and eyes on the road.

Different, by design
“The previous Fusion was an easy purchase for a customer to rationalize,” said Chris Hamilton, chief exterior designer for the next-generation model. “Our design goal for the new car was to give the mainstream sedan buyer a top-drawer visual experience, adding some emotional appeal to an already sensible choice.”

These five elements provided direction for the design team behind the all-new Fusion:

Inside, the new Fusion offers a sporty, driver-oriented environment with next-generation seating that brings expanded functionality. A higher center console supports the driver-centric theme and yields clever storage for items a driver wants to keep handy.

Interior surfaces are softer to the touch and interior and exterior gaps are minimized, while extra care has been taken to upholster or cover each edge and every surface a customer can touch. When the trunk lid is opened, for example, a spring-loaded cover automatically conceals the trunk latch hardware.

“The holistic goal of our craftsmanship process is to see that Fusion not only delivers a superior visual experience but also feels like quality to the customer,” said Adrian Whittle, Fusion chief engineer.

Key contributors to how the Fusion feels are the ride and handling components that maximize vehicle dynamics.

Careful tuning by Ford’s vehicle handling and ride team has yielded a Fusion with a dynamic character that will please a well-seasoned enthusiast while increasing the confidence level of less-experienced drivers.

Fusion interior quiet reaches a new level with acoustic underbody shields and weight-saving sound-absorption material; both minimize road and powertrain noise while boosting aerodynamic efficiency to help save fuel. The all-new model adds content such as a full-perimeter hood seal to be among the midsize sedan segment leaders in giving drivers a quiet ride.

Strength and safety
Fusion is designed with customer safety in mind. Engineers increased its body strength by 10 percent, using more high-strength steels such as boron, and added dual first-row knee airbags and adaptive front airbags that vent and tether to conform to a specific occupant’s size, position and seatbelt usage.

The most prominent example is Fusion’s front-end architecture, as the same car must face simultaneous – and seemingly conflictive – standards across regions. The car’s front end is equipped to meet head-on and offset barrier standards for North America while still conforming to European standards for pedestrian protection – thanks to hours of computer modeling and 180 validating crash tests.

Fusion will be produced at Ford’s Hermosillo, Mexico, manufacturing facility, soon adding production at AutoAlliance International Plant in Flat Rock, Mich. The car will appear in Ford showrooms in North America and South America later this year. Mondeo will be introduced next year in Asia and Europe.

The story behind the new Fusion
For more on the new Ford Fusion, check out http://FordFusionStory.com, a special mobile site featuring plenty of unique content including articles, videos and graphics that are easily shareable directly from your smartphone, tablet or computer browser to Facebook, Twitter, Google+ or blogs.

About Ford Motor Company
Ford Motor Company, a global automotive industry leader based in Dearborn, Mich., manufactures or distributes automobiles across six continents. With about 166,000 employees and about 70 plants worldwide, the company’s automotive brands include Ford and Lincoln. The company provides financial services through Ford Motor Credit Company. For more information regarding Ford and its products worldwide, please visit http://corporate.ford.com.

Bharat Nagpal
Founder and Chief Editor of iGyaan. Bharat likes to keep on top of technology ! Follow Him on Google Plus : Google+
You Might Also Like
FordLatest
Read More