Olympus has introduces the new PEN E-PL5 and E-PM2 in Cologne at Photokina 2012,  only  progressive updates to already-existing lines, but there are some notable new features packed into these tiny bodies. Both models, announced today, offer nearly identical specifications, with notable differences on the form-factor front. Just like its predecessor, the E-PL5 has an articulating screen and a small, all-metal body. Specs include The smallest member of the PEN family shares many of its features with the E-PL5 :

The E-PM2, however, has a built-in grip with a button for calling up the Live Guide function that helps shooters learn how to deal with most photographic situations. 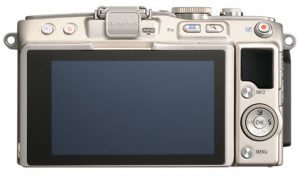 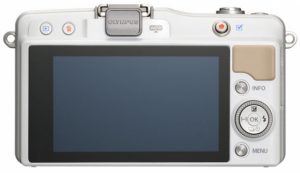 As aOlympus also announced a body cap that actually doubles as a lens. The 15mm lens has a full-frame equivalent focal length of 15mm and a constant aperture of f/8, meaning that it doesn’t get bigger or smaller. It’s an interesting little piece of kit and adds a lomo-type feel to the PEN bodies.

CENTER VALLEY, Pa., September 17, 2012 – Today, Olympus announces two new PEN compact system cameras, the latest in its award-winning line of Micro Four Thirds® products, designed to help both advanced and emerging photographers take their creative power to a whole new level. The Olympus PEN E-PL5 and PEN E-PM2 deliver amazing image quality by packing superior image technology, blazing fast processing speed and total creative control in classic bodies that combine the portability and ease of use of a point-and-shoot without the complexity of a DSLR.

In addition to advanced shared technologies outlined below, each new model offers unique features of its own:

Olympus PEN E-PL5: This powerful performer boasts significant improvements in functionality and ease of use. It features an all-metal body in silver, black or white and is portable enough to travel across the world without sacrificing DSLR image quality and the control that experienced photographers expect. Inherited from its predecessor, the E-PL5 has a swiveling monitor with a greatly expanded swivel range of approximately 170° up and about 65° down, making it easier to shoot pictures from low or high angles, and offers the ability to flip the monitor up for self-portrait shooting.

Olympus PEN E-PM2: The ultra-compact, simple and stylish, smallest and lightest Olympus PEN is designed for people who want to try an interchangeable lens camera for the first time. Available in silver, black, white and red, the E-PM2 offers an intuitive vertical touch navigation menu displayed by pressing the MENU button to provide a fast and easy way to switch modes with fewer steps.

Superior Image Quality and Low Light Performance
Both new Olympus PEN cameras share the same 16.1-megapixel High-Speed Live MOS Sensor and new TruePic VI image processing engine as the award-winning, flagship Micro Four Thirds system camera, Olympus OM-D E-M5. Armed with this technology, the new PENs are outstanding low-light performers with a maximum ISO of 25,600 and a dynamic range that has also been increased, enabling finer expression of gradations between dark and bright areas with a wider range of intensity. An AF Illuminator and accessory FL-LM1 flash, included with both cameras, adds to their low-light performance. Photos and HD videos will be crisp and clear thanks to three modes of in-body image stabilization and the award-winning Olympus Dust Reduction System.

Blazing Speed
Tapping in on the chosen subject within the frame of the cameras’ LCD monitor instantly focuses the subject and automatically triggers the shutter for instantaneous in-focus image capture thanks to the Touch AF Shutter function. The combination of the speedy response of the touchscreen panel and the FAST (Frequency Acceleration Sensor Technology) AF system, the same technology that made the Olympus OM-D the world’s fastest autofocusing camera, gives users the power to capture precisely the image they want at precisely the moment they want it. With instantaneous focusing, the camera won’t shake the moment the shutter is released, assuring maximum clarity and stability, even when shooting moving subjects. Maximum frame rates have also increased more than 2X with a maximum frame rate of 8 fps in Single AF mode.

Ease of Use
Both new models have a 3-inch, 460,000-dot high-definition LCD screen and an Anti-Finger Print coating to reduce smudges. The display offers a wide 176-degree angle of view and is bright enough to compose images even in harsh midday light. Capturing the shot you want is easy with the E-PL5 swivel LCD that rotates up 170 degrees for simple self-portrait shooting. The intuitive and practical touchscreen makes navigating the camera’s menus and graphical user interface effortless. Going through a day’s photos is as easy as scrolling through the images and enlarging photos with the tap of a finger. Change the feel of each camera to suit your preferences with a detachable grip included with the Olympus E-PL5, and the Olympus E-PM2 grip is built-in. A convenient button on top of the E-PM2 calls up the Live Guide function instantly from any shooting mode for intuitive assistance whenever needed. My Sets on the E-PL5 Mode Dial allow further customization to suit the user’s shooting preferences.

Creative Control
The Olympus E-PL5 and the Olympus E-PM2 bring a new level of freedom to the creative shooting experience. A new Water Color effect joins 11 available in-camera Art Filters (Diorama, Pop Art, Soft Focus, Pale & Light Color, Light Tone, Grainy Film, Pin Hole, Cross Process, Gentle Sepia, Key Line and Dramatic Tone) and adds to other brilliant, easy-to-use functions, including Variations and the new Monochrome effect. In-camera RAW data editing selects various settings for RAW data editing and previews the images before applying changes. The customizable Self Timer programs the shutter release to go off at select intervals to ensure the perfect shot. A small single AF target can be selected for pinpoint focusing beyond the existing 35-point area selection. Users can get creative while shooting in 1080i Full HD Movie with fade effect, so you can transition from art filter to art filter without stopping the movie. While shooting a movie, the Movie Teleconverter function magnifies up to 4x without image deterioration.

Sharing in a Flash
Using the OLYMPUS Image Share application, which is compatible with both iPhone® and Android® smartphones and the Toshiba FlashAir® SDHC memory card, it’s easier than ever to upload pictures to your favorite social network. Both PENs can set up the FlashAir using the built-in smartphone connection capability for an effortless Wi-Fi connection between PEN and your smartphone. The OLYMPUS Image Share application makes it easy to upload images to a smartphone by selecting them from thumbnails, apply Art Filters on the smartphone and share. Images can also be enjoyed by friends and family by issuing a one-time password to connect several smartphones simultaneously to the cameras.

Is It a Body Cap or a Lens? It’s Both.
Olympus also introduces an intriguing new lens for its Micro Four Thirds line. The BCL-15 f8.0 Body Cap Lens serves as a body cap when carrying the camera around without its interchangeable lens, and transforms to become a pan-focus snapshot lens to capture images. The lens is so thin – just 9mm thick – that it can easily be mistaken for a camera-mount body cap. With three glass lens elements in three groups, it can be used as a wide-angle lens equivalent with a single focal length of 30mm (35mm camera equivalent). In addition to daily use as a “pan-focus” lens featuring a wide angle, fixed f8 aperture and shallow depth of field, it is compatible with manual focusing using a lever and capable of close-up shooting as close as 30 cm. A lens-protection barrier is provided so the lens can be mounted permanently on the camera and even put in a pocket together with the camera.

Coordinated Accessories to Enhance and Protect Your Camera
New Olympus PEN accessories provide sturdy protection for users to enjoy convenience, comfort and style wherever they go. The CS-38B is a genuine leather body jacket designed exclusively for the PEN that protects the camera body without detracting from its design. The body jacket’s genuine leather and rugged construction combines casual with contemporary styling and is available in four colors.

The CBG-8 is a versatile camera bag that can be hung across the shoulder, carried by hand or used as a bag-in-bag. It has a detachable inner pocket, which is partitioned to enable storage of other items in addition to the camera and lenses, such as a smartphone, while the outer pocket is large enough to accommodate a tablet PC or A4-size file folders.

Bharat Nagpal
Founder and Chief Editor of iGyaan. Bharat likes to keep on top of technology ! Follow Him on Google Plus : Google+
You Might Also Like
LatestOlympus
Read More