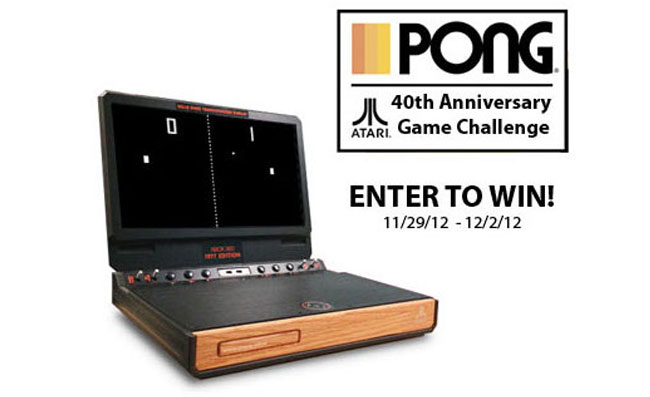 To celebrate the 40th birthday of Pong, one of the earliest arcade video games ever created. Atari has created a modded Xbox 360 which is equipped with a LCD screen and been custom styled to look like the original Atari 2600 games console.

The original Atari 2600 game console was released back in October 1977 by Atari and used microprocessor-based hardware and ROM cartridges containing the games code, rather than using non-microprocessor dedicated hardware with games code built in.

The company has also launched a new Pong game for iOS which is now available to download for free from the Apple iTunes App Store. “Pong World introduces a new generation to the classic game of PONG with a dazzling unique twist and colorful new look,”

To enter into the draw for the custom Pong Xbox 360 console, jump over to the Atari Facebook page to signup. Competition only open for residents of the U.S.

likethis
What's your reaction?
Awesome
0%
Epic
0%
Like
0%
I Want This
0%
Meh
0%
Posted In
Latest, XBOX
Tags
About The Author

Shivaank Rana
iGyaan's Carlos Santana! Shivaank loves Apple products! He stays up to date with the latest happenings of the tech world and gets his hands dirty with the latest Gadgets! Follow Him on Google Plus : Google+
You Might Also Like
LatestXBOX
Read More