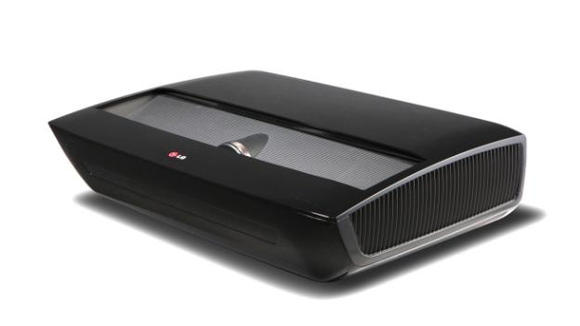 LG’s new Hecto projector may be just the thing for folks who want a huge viewing space, but have a limited area in which to do it.

High-end projectors have been around for some time now, but the big issue has been that you needed to have a lot of space between the device and the screen. Using lasers, this latest device from LG only needs 22-inches of clearance to give you a 100-inch diagonal display. Capable of 1080p projection, the Ultra Short Throw unit also features a digital tuner.

The projector also boasts Smart TV and Digital TV functionality, 3 HDMI ports, audio outs, a 10w speaker and can be placed near the floor in front of the screen, rather than having to be attached to the ceiling.

LG says the system, built using its laser-based Illumination technology, will provide a better option for those without the space to hang a traditional projector and bring cinema-style viewing to the home.

[quote]It will provide picture quality “about the equivalent to plasma,” said Tim Alessi, LG product planning director. “It will have great color and black levels, the motion reproduction is excellent and you don’t need a totally dark room as you would with a traditional front projector.”[/quote]

No word as of yet on a price or release date, but as this one of the many pre-CES 2013 announcements the company is making, we’re sure to learn more in just a few weeks.

likethis
What's your reaction?
Awesome
0%
Epic
0%
Like
0%
I Want This
0%
Meh
0%
Posted In
Communication Interface, Latest
Tags
About The Author

Shivaank Rana
iGyaan's Carlos Santana! Shivaank loves Apple products! He stays up to date with the latest happenings of the tech world and gets his hands dirty with the latest Gadgets! Follow Him on Google Plus : Google+
You Might Also Like
Communication InterfaceLatest
Read More