Watch the Launch of the Galaxy Grand Live on iGyaan

by Bharat NagpalJanuary 21, 2013
2
Now Reading
Watch the Launch of the Galaxy Grand Live on iGyaan
Browse This Page Samsung is ready to announce the Galaxy Grand for the Indian market at 12:30 on January 22nd 2013. Bookmark this page to watch it live. The Samsung Galaxy Grand is dual-SIM smartphone and features a massive 5-inch WVGA display , which as per the resolution (800 x 480 pixels) can be termed as average at best. The smartphone runs on Android 4.1.2 Jelly Bean out of the box. Under the hood, the Galaxy Grand is powered by a 1.2GHz dual-core processor coupled with 1GB of RAM so we can easily expect a smooth operation on the device for the most part.

The device looks strikingly similar to Samsung’s current flagship smartphone, the Galaxy S3 and comes with 8GB of internal storage along with a micro-SD card slot using which, users can expand the storage on the device by up to 64GB. For connectivity, the Galaxy Grand features 3G, Wi-Fi, Bluetooth 4.0, A-GPS Glonass and DLNA. 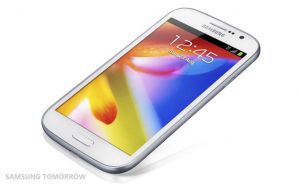 Apart from these features, Samsung Galaxy Grand comes with some unique features as well. Some of the features on the device include ‘Direct Call’, which enables users to automatically dial a call by raising the smartphone to the ear.

Popup video allows the users to watch a video in a pop-up window anywhere on the screen while running other tasks on the device. The AllShare Play feature allows the users of the device to share content across different Samsung devices using just a single account. Another interesting feature is the ‘Smart Alert’. which shows missed events such as missed calls and new messages when users pick up their phone.

The Phone will be launched tomorrow January 22nd for India, expect a full detailed hands on video along with more relevant details for the launch.