Samsung is all set to launch the Galaxy S4 in India on the 26th of April 2013. It is believed that the flagship smartphone for the Korean company will come for Rs. 42,900/- and the device will be launched in two colors namely the Black Mist and the Frost White.

The Samsung Galaxy S4 in India will be available initially in a bundled offer which will include a flip case and some accessories. The Smartphone has received many a critical acclaim globally thanks to its many features and software enhancements. 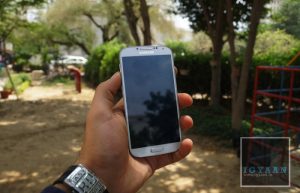 In the hand the Samsung Galaxy S4 seems a lot more robust than its predecessor, however the feel is still plasticky. The device does end up looking a lot more elegant thanks to the brushed aluminum “look” bezel and the nicely pattered back panel which is better visible in the black mist color. Although the Galaxy S4 sports a larger 5 inch display, it does not look a lot bigger than the S3, in fact the Samsung Galaxy S4 is a lot more rounded and fits well in the hand as well as in the pocket. 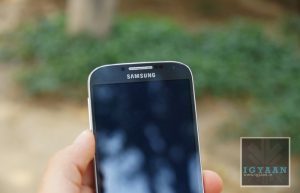 The interface on the Samsung Galaxy S4 is a lot more refined than on other Android phones, including other Samsung Phones. The devices we saw were prototypes, however they ran wonderfully well, with no lag, gestures were great too as you will see in the video.

[pullquote_left] The phone does magic![/pullquote_left]The TouchWiz/Nature UI is now easily recognizable and does not have a lot of differentiation from previous editions, the built in features from the past like multi window, pop up play along with some new UI elements like, finger hover and retina sensors make using the device magical. From a consumer point of view the phone does magic, which in a sense of the word sets it apart from devices that don’t do “magic”.

With just a limited time spent with the two Galaxy S4’s I can safely say that the white color is much better and looks a lot more nicer than the Black, however the black is a lot more elegant and with that a finger print magnet.

With the launch just around the corner, the Samsung Galaxy S4 may just as well be the biggest hype this quarter from Samsung and with the details of the Note 3 leaking out, we can safely assume that its not the last hype for 2013.