Motorola One Action Unboxing And Hands On

by Vikhyaat VivekAugust 23, 2019
0
Now Reading
Motorola One Action Unboxing And Hands On
Browse This Page Motorola launched its One series of smartphones back in 2018. The range is distinguished by its Android One support and its latest instalment has just been launched in India. Motorola One Action is a mid-range smartphone with a triple camera setup on the rear. Here is our unboxing and hands on of the newly launched device. The Motorola One Action bears similarilities in design with the previously released Motorola One Vision. However, unlike the latter, the former has a plastic back rather than a glass one. The device measures 160.1 x 71.2 x 9.2mm and weighs about a 181g. On the front, the device features minimal bezels which is in part due to its in display punch hole selfie camera. The build feels robust and the polycarbonate back rounds the corners as well. Motorola One Action’s flanks house the volume rockers and power button on the right while the left is bare with just a SIM card slot. On the rear, the device has a triple camera module on the top left with an LED flash right below it. The signature batwing style “M” logo is found in the fingerprint scanner in the middle while the Android One branding can be seen at the bottom. Motorola One Action features a 6.3 inch LTPS IPS LCD Full HD+ display with a resolution of 2520 x 1080px. Notably, the device has an aspect ratio of 21:9 which is great for watching movies or videos that are also natively filmed at this ratio. Usually, black bars have to fill the top and bottom due to devices having an 18:9 display. The display, as mentioned above, has a punch hole selfie camera which also allows for an unintrusive viewing experience. Chipset, Storage and Other Features

Under the hood, the Motorola One Action houses the Exynos 9609 SoC which is manufactured using a 10nm fabrication process. Interestingly, the chipset is also found in the Motorola One Vision as well. The mobile CPU consists of an octa core processor which is clocked at 2.2GHz alongside the Mali G72 MP3 GPU. It offers 4GB of RAM which is coupled with 128GB of internal storage similar to the One Vision. Furthermore, the storage of the handset can be further expanded up to 512GB via a microSD card. 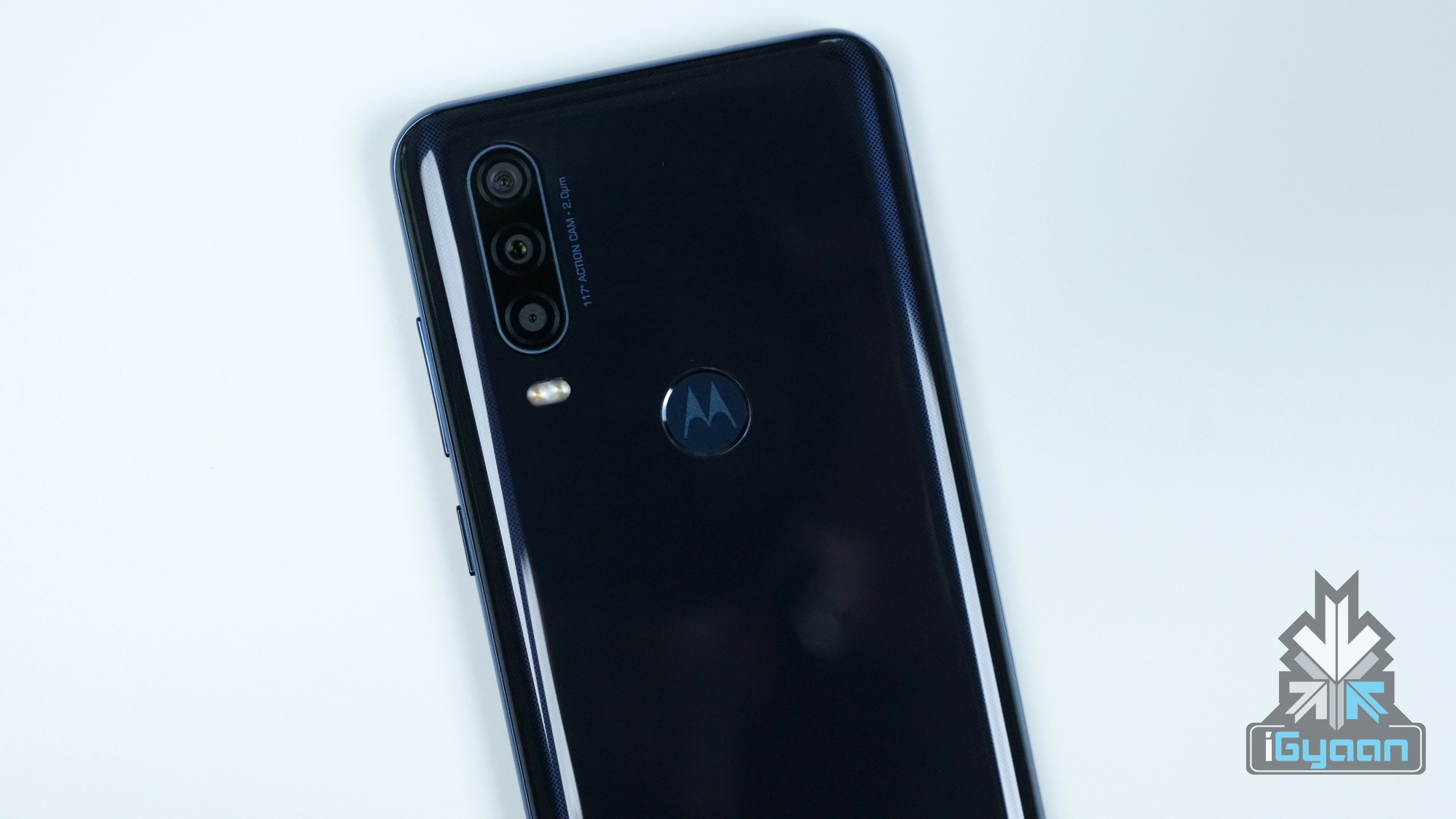 Motorola’s One Action stands out from the One Vision with a triple camera setup over the latter’s dual cameras housing. The primary lens is a 12MP shooter with f/1.8 aperture alongwith 5MP depth sensor combined with a wide angle action camera with a 117 degree field of view. On the front, the device houses a 12MP with f/2.0 aperture and 1.25um pixel size for selfies. The device is powered by a 3,500mAh battery which unfortunately does not support fast charging with only a 10W charge rating. For connectivity, Motorola One Action includes Wi-Fi 802.11 a/b/g/n/ac, Bluetooth 5.0, dual 4G VoLTE, GPS, NFC and bottom mounted 3.5 mm jack and USB Type C port which can be used for charging and data syncing. Colour Options and Other Features

Motorola One Action is available in two colour options that are Denim Blue and Pearl White. Additionally, the device packs many noteworthy features such as face unlock, Action Cam, 21:9 display, Moto Actions and Gesture support and more. It also houses many of the basic sensors like a fingerprint reader, proximity sensor, ambient light sensor, Gyroscope and others. Notably, the smartphone is an Android One device which means it is guaranteed to receive to major OS updates and three years security updates. Motorola One Action can be purchased from 30th August 2019 and will be available from Flipkart.com and will also arrive in select offline stores. The price of the single storage variant (4GB RAM + 128GB ROM) is INR 13,999.

Click here to check out the Motorola One Action on Flipkart