Samsung’s success in the Indian market is truly thanks to their ability to understand the need of the market. The company understood that by penetrating the lower end of the spectrum they could increase their popularity. So with devices like the Galaxy Ace and Galaxy Y, Samsung tapped the under 10,000 market space.  With the Galaxy Y plus, Samsung has further tried to take away from the feature phone buyer and get him interested in smartphones. In our    Samsung Galaxy Y Plus review we try to see if Samsung has yet another winner. Weather you buy a Rs. 5000 phone or a Rs. 50,000 phone from Samsung, you will find the excessive use of plastics. The Samsung Galaxy Y Plus is no different, with a Plastic chassis, plastic back and plastic bezels along with plastic buttons. The phone however is robust and looks or at least feels like it could survive a bunch of falls and crashes, in fact we wont be surprised if it survives a car running over it, only to be thrown away.

The design and shape is reminiscent of the Y Series of Galaxy phones. The shape adds a bit of the looks of the higher end of the spectrum devices from Samsung. 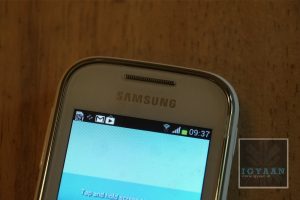 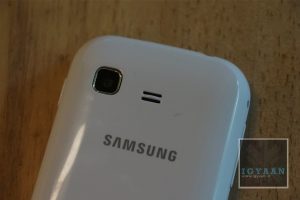 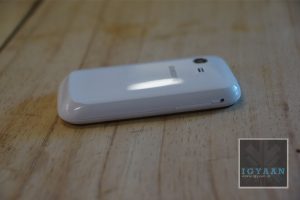 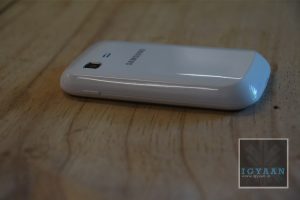 Not a lot to boast about here for the Samsung Galaxy Y Plus. The front has a 2.8 inch LCD which has a resolution of 240 x 320px making it 143 ppi, it truly makes you wonder if Samsung will ever dump small size AMOLED displays in budget phones. The insides are a little sketchy with an unknown 850 MHz processor, no details for any sort of GPU and no info on the RAM. If we were to guess, we’d say the RAM should be around the 384MB mark.

The Galaxy Y plus has a 2 MP, 1600×1200 pixels, camera which has a fixed focus and Geo Tagging capability. The internal storage is shown as 4GB out of which under 2 GB is available to the user and expandability is kept at 32GB via microSD. The Galaxy Y Plus has a 1200 mAh battery which seems sufficient considering the specs in question even thought the phone has two sim card slots, one for 3G and one for 2G. The Samsung Galaxy Y Plus comes with Android 4.0, which is a slight disappointment especially because companies like Micromax are throwing out Jelly  Bean equipped phones by the minute. The interface however is very responsive and seems like this variant of Android was a logical choice of the company to retain the fluidity of the  experience.

TouchWiz is also loaded on the tiny display which makes for a fun trailer to what you can expect when you later on switch to a more expensive Samsung Device (the company is betting on this). In fact adaptability of OS along with the available hardware is surprisingly great and performance seems acceptable from a phone of said value. The phone is poor in these departments and for anyone who may be looking to buy this phone for the multimedia aspects, we suggest you look elsewhere. Although the Samsung Galaxy Y Plus is capable of playing games like temple run 2 smoothly, we feel the display is tattered and totally takes away from any such experience. Similar is the video playback experience, not only does the screen create a letterbox, but also reduces the size of the video to play it totally taking away from the end user enjoyment.

Pictures can be clicked from the phone’s 2 MP snapper never to be reconsidered, Samsung’s emphasizes on the geo tagging feature, as if we must remember exactly where we clicked the atrociously horrible pictures which were completely out of focus.

The Samsung Galaxy Y Plus Duos is a great dual sim phone, which fades the barrier between smartphone and feature phone. While it does have multitasking capabilities, and a whole array of multimedia features you may not end up using any of them except possibly the loud music from the speakerphone.

If you want to get a basic phone to make phone calls and send messages , this is your bet, dual sim with a good two day battery life and great network reception and a loud speaker. You may also be happy knowing that you have other Android capabilities which you may never use.