The packaging is minimal suggesting towards the lower end spectrum for Samsung but also infusing their new less paper (eco-friendly) model they suggested during the launch of the Galaxy S4. Listed below are the box contents: There are a bunch of differences in the Galaxy Grand Quattro, starting with a smaller 4.7 inch 480 x 800 px display, which bumps up the ppi to 199 ppi. The chipset on the inside is now a Qualcomm MSM8625Q Snapdragon 200 quad-core 1.2 GHz chipset, along with an Adreno 203 GPU.

The rear camera and the front camera have also been downgraded to 5 MP and VGA from 8MP and 2.1 MP respectively. Inside however we still have 8GB of storage (5GB + is available to the user) and 1 GB of RAM. 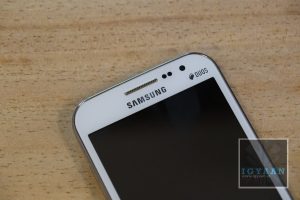 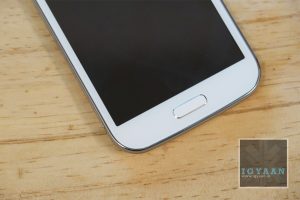 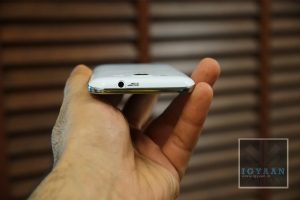 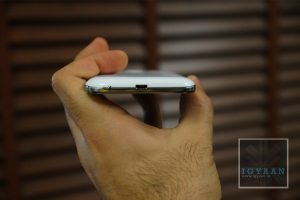 The build quality is along the lines of the Galaxy Grand, composed of 100% plastic build including the back panel and the bezel. The Galaxy Grand Quattro has a significantly smaller footprint thanks to the smaller screen size. The phone also weighs less and fits comfortably in the hand of the user.

The interface reminds us of many of the recent Samsung launches all showing of similar Touch-Wiz and Android 4.1.2 functionality. The Galaxy Grand Quattro / Win however, does not carry the smart features seen on the Galaxy Grand, No Multi Window toolbar, no S-Voice and No Pop-Up-Play. Which could nullify the proposition for a lot of buyers. The Smaller screen is definitely more crisp and is evident in the first impression. Video playback is smooth even though we felt a bit of lag in the Internet browser. The keyboard is as fast as ever and retains the continuos input option, along with all of the Samsung customizations for its keyboard. The Samsung Galaxy Grand Quattro / Win is a promising upgrade to the Galaxy Grand, it removes a lot of software and hardware features, but, does two interesting things, Adds a quad-core Processor and drops the price by about Rs. 2500 or US $ 50.

Bharat Nagpal
Founder and Chief Editor of iGyaan. Bharat likes to keep on top of technology ! Follow Him on Google Plus : Google+
You Might Also Like
LatestSamsungUnboxing and Hands On
Read More