Micromax attempts yet another handset in the Indian Market with the new A111 Canvas Doodle, trying to grab the attention of budget seekers. The Quad Core  smartphone is Micromax’s take on making a budget Note series smartphone. But, does the Micromax A111 Canvas Doodle fulfill that promise? lets find out. The Micromax A111 Canvas Doodle isn’t exceptionally well built, but has just the right mix of elements that make it a fairly durable phone. The plastics and the back panel are solid and do not have any rattle in them what so ever. The included flip cover is a poorly made cover and will not last the users a long time, the fact that the white colored faux-leather material is not coated also makes it a dirt and grime magnet. However, it does do its job of protecting the front screen of the Micromax A111 Canvas Doodle, which thankfully takes a different design approach from the previous Canvas series smartphones.

The insides are laced with a thick layer of Qualcomm grease, in other words a Qualcomm MSM8225Q Snapdragon chipset runs the Canvas Doodle. The RAM is kept at a lowly 512 MB, and storage a mere 4 GB. The good thing however, is that the phone when provided with a class 10 microSD card, converts that into the main storage. This truly expands the capability of the device and makes Micromax’s Canvas series highly desirable (at least the new units). The front of the phone has a large 5.3 inch 480 x 854 px display which will not win any points in the resolution department, but is surely a large display. Cameras on the Micromax A111 Canvas Doodle include an 8 MP main shooter and a 2 MP secondary shooter. Both of which are fairly good  in their respective capabilities. You will also get video calls over 3G from the front facing camera.

The Micromax A111 Canvas Doodle take a design leap in a new direction, making the phone a lot more squarish and flatter vs the wobbly and curved design of the previous generation of Micromax Canvas phones. The bold new logo on the back, although appreciated by some, is almost like an eyesore on a fairly well finished smart phone, which constantly reminds you that you own a “punch” flavored smart phone.

The Doodle of Jelly Beans

Fortunately for Micromax, they do get redeeming points because, the freebies aside, the phone is quite a capable handset. With dual sim and the storage extended the phone manages to run smoothly and will not crash in daily chores. The internet experience is pleasing and the overall usage of the phone will not be a let down.

If you are seriously considering this device for the included stylus and drawing capabilities, investing in a tablet and a Rs. 1000 stylus will get you more than the Jelly Bean Doodle. The Micromax A111 Canvas Doodle is quite capable in other aspects and due to a firly common resolution will support most of the apps from the Google Play store, including high end games, which we tested in the gaming video. See below. 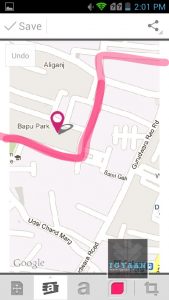 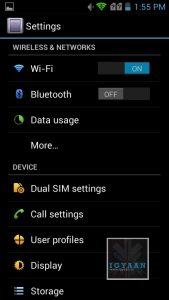 [pullquote_left]The oodles of the Doodle! [/pullquote_left]We have understood, mostly from our readers, that the maximum number of sales happening in these so called “budget phablets” are happening with the youth or the younger crowd. The usage of the phone survives around social media, networking, Multimedia consumption and creation along with leisure activities that include some gaming. The Micromax A111 Canvas Doodle seems to be a good balance in all, while not being premier in either.

Due to the nature of the Android Eco System, the Micromax A111 Canvas Doodle is capable of all forms of social media and networking. You have apps for Facebook, Pinterest, Flipboard (subscribe to iGyaan on Flipboard ) and Instagram, just to name a few. You have all forms of other apps that let you interact between networks and socialize over multiple platforms. The internet experience is good too, the Micromax A111 Canvas Doodle has WiFi and 3G access allowing you to connect to high speed internet (if present) and access all forms of networks. The internet browser is fairly smooth and capable, while many a replacement are available in the Android Google Play store, to improve the online experience.

The Camera on the Micromax A111 Canvas Doodle is an 8 MP autofocus camera capable of capturing good pictures provided light is ample, a little into the darkness and the distortion in the images is clear. See some samples below. The front camera is also quite handy for clicking self portraits for that new Facebook profile picture or even group party shots. Since the Camera app is not custom designed, it will be better if you opt in for a premium app from the Play store. Gaming on the Canvas Doodle was surprisingly good, it played all forms of games from tennis to NOVA 3 and handled them quite capably. Most high end games will run with reduced graphics, but will play smoothly enough to be able to enjoy the gameplay.

The networks and phone call capability on the Micromax A111 Canvas Doodle is excellent, with little or no network issues, and great connectivity throughout, you will have no complaints with the phone. The dual sim is still standby, so if you are connected on one, the other remains off or out of reach. We also have issue with only one slot being 3G, its high time that companies start adapting the Samsung approach and making phones that let you switch 3G internally vs a sim slot capable of 3G and another for 2G.

The battery is good for one day with average usage, but if you are a heavy user expect to charge it twice. The Micromax A111 Canvas Doodle offers you up with a capability of being a Note-worth competitor, while failing miserably at that, it by itself is quite a satisfying product. A well balanced phone with a new design and decent hardware on the inside. It balances between all the tasks you could expect from a phone while leaving out performance from any. If you are opting in for a well balanced device, the Micromax A111 Canvas Doodle will not disappoint, But, of you are looking for a single important feature, be it pure gaming, Online capabilities or even a great camera, The Micromax Canvas Doodle is not the phone you want to get.