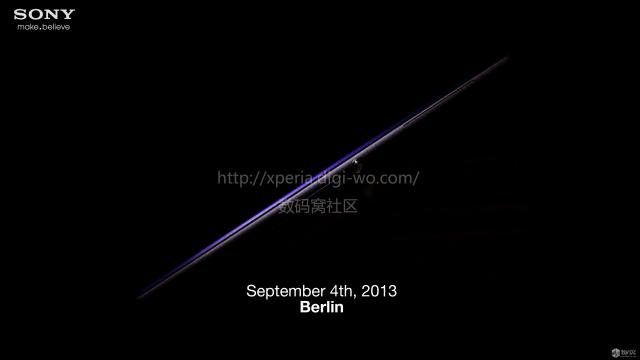 A picture that appeared on Chinese site Digi-wo and XperiaBlog, shows a splash of purple across a black background,but if you look closely, that’s actually a phone. This can be, Sony’s rumoured next addition to the Xperia line, previously going under the codename of Honami – and now referred to as the Sony Xperia i1.

As we can see, the image teases a September 4 date on the bottom with “Berlin” written below it. This means that Sony might have this device ready for us this year at IFA 2013 (Berlin).

The picture shows a teasing glimpse of the right side of the phone where you can see the power button, a flap and volume rocker. This purple-coloured Honami seems to show that the frame will be of a different material – perhaps aluminium ?

As per the rumors this device supports a 20 MP camera capable of shooting a 4K video, and phone is supposed to be powered by a quad-core processor.

Just for your reference here is an closer look for the device: A closer look showing the power button of the device. A closer look that shows the volume rockers.

We can’t take this rumor as legit until Sony declares the handset globally and officially, hopefully at IFA 2013 next month.