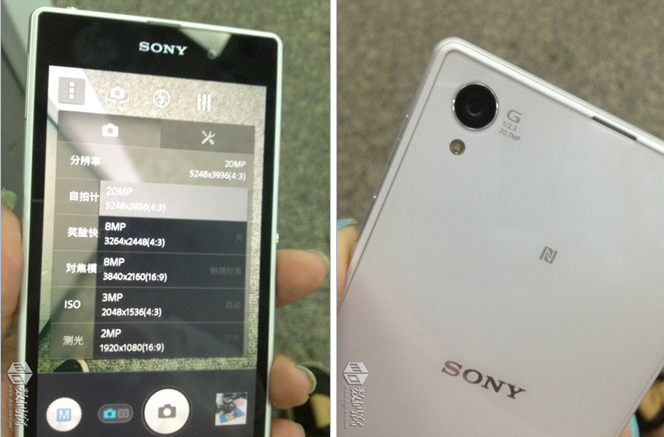 The Sony Honami is said to be the upcoming flagship device from Sony Mobile, and while we have heard our fair share of rumours concerning the Sony Honami, including a “masked” version that was caught in the wild, disguised so that we cannot really tell what the real deal looks like, in addition to an alleged photo snapped with the Sony Honami’s rumored 20-megapixel camera, here we are with yet another alleged Sony Honami device hanging out with the iPhone 5, sporting a shade of white and a minion as its wallpaper. Though Sony only announced the Xperia Z in January Sony is readying a follow-up device to ensure it isn’t left behind in the constant hardware refresh cycle from Android OEMs.

It’s difficult to discern if the back panel is still made from glass. The rectangular shape remains, though this time the corners are a little softer and there is a metallic surround visually separating the front and rear of the phone while featuring similar ‘panelled’ detailing that we’ve seen on the last few Sony handsets. It is expectedly huge next to the 4-inch iPhone 5, but so are most Android flagships these days.

It’s not clear whether the 20MP camera will produce brilliantly detailed shots, but the sensor size is notably larger, at 1/2.3?, than on regular smartphones. According to purported shots of the camera software, the ISO (light sensitivity) can be raised to 12800, which should allow for some amazing low light shots (albeit with a fair amount of grain).

Sony is expected to launch Honami on September 4th at the IFA conference in Berlin, shortly before Samsung announces the Galaxy Note 3.