The Samsung Galaxy Note 3 was launched in India for a price of Rs. 49900 (roughly translated to “more than most can afford”) and is now available throughout India. The Samsung Galaxy Note 3 features a new design over its predecessor boasting a soft-touch, leather like back, along with many hardware changes that put it right in line with many flagships out there. But, at the price at which it has launched, should you go in for the Galaxy Note 3? or should you get the Galaxy Note 2? Here is where we break it down for you. 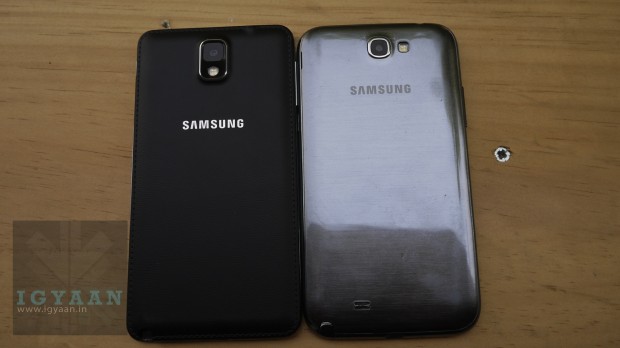 The Note 3 is actually slimmer and thinner than the Galaxy Note 2 despite getting a larger 5.7-inch full HD 1920 x 1080p display. The Note 3 also appears to be squarish from the front and has a slightly raised bezel, as opposed to the roundish bezel on the Galaxy Note 2. The new leather look back panel on the Note 3 definitely adds a lot more premium appeal to the previous plastic and poorly constructed look. Which however, does not change the fact that the phone is still completely plastic, now its just plastic hidden behind faux leather-appearing plastic.

Apart from the obvious differences in the specs, the major changes on the new Note 3 worth noting are, the aforementioned Full HD display, a new Exynos 5 chipset vs Exynos 4 on the Note 2 which offers an effective 1.9 GHz on Quad cores (with full octa-core functionality by December.). You also get 3 new temperature, humidity and gesture sensors, along with an additional gigabyte of RAM. A 16GB bump in storage capacity makes the basic variant (and the only one available in India) a 32GB variant. A slightly larger 3200 mAh battery and 13 MP camera finish off the changes on hardware. Check out a comparative below.

Despite most attempts by the company, most of the new features of the Galaxy Note 3 will be available on the Galaxy Note 2. Including the new Action command feature which can be executed from the S Pen. With not a lot of difference for the end user, one would consider going for the Note 2 as it would mostly achieve all the features that one would require from a smart phone with pen functionality. 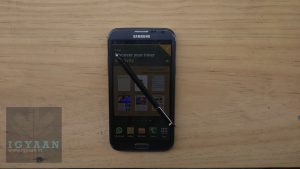 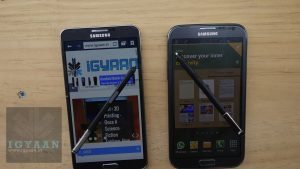 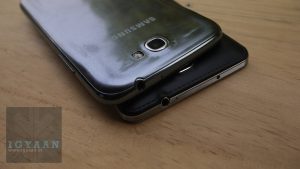 The Galaxy Note 3 is the latest flagship from the company while the Galaxy Note 2 did really well in the past and offers most of the features for the Note 3 at a considerably low price. If you really need to get the  most for your money’s worth, the Galaxy Note 2 is still an impressive piece of hardware with a lot going on under the hood, it is still capable of handling every app in the Google Play store, and whatever you can throw at it. If the latest is what you must get, then consider spending a lot more for the newest Note 3.

Bharat Nagpal
Founder and Chief Editor of iGyaan. Bharat likes to keep on top of technology ! Follow Him on Google Plus : Google+
You Might Also Like
AndroidLatestRecommendationsSamsung
Read More