Samsung shows the camera technology in the next generation of Galaxy smartphones. The devices will likely feature ISOCELL, the company’s new imaging sensor. Samsung claims that the new sensor adds advanced pixel technology that polices the absorption of electrons for improved color fidelity, even when lighting isn’t ideal. The new sensor will be available only in new premium smartphones and tablets.

The quality of an image sensor is determined by the amount of light that is accurately captured by the individual pixels within the sensor array. Samsung says this is been a challenging task for them, with the market pressure to increase camera resolution and image quality, without growing the camera size, the pixels have had to shrink, while improving their performance at the same time. 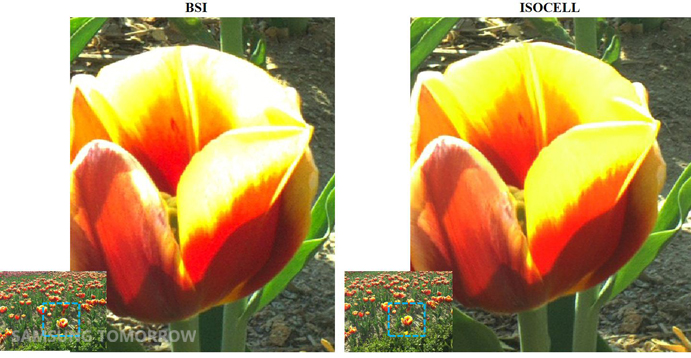 To meet this challenge, previous sensor technology developments focused on improving the light absorption of each pixel, and have progressed pixel technology from FSI (Front Side Illumination) to BSI (Back Side Illumination) which places photodiode at the top to maximize photoelectric efficiency. While being very effective at the time, this BSI technology also faced limitations in improving image quality as pixel sizes continued to decrease.

While, the ISOCELL technology forms a physical barrier between neighboring pixels, isolating the pixel. The company claims, this isolation enables more photons to be collected from the micro-lens and absorbed into the correct pixel’s photodiode minimizing undesired electrical crosstalk between pixels and allowing expanded full well capacity.

This new sensor is specifically for phones with 8 MP or higher, which could mean a drop down from the 13 MP camera seen in the Galaxy S4 and Note 3. A full camera unit with the new ISOCELL would also take up less space inside devices compared to previous imaging sensors, with a reduced height which can result to even thinner smartphones.

likethis
What's your reaction?
Awesome
0%
Epic
0%
Like
0%
I Want This
0%
Meh
0%
Posted In
Latest, Samsung
Tags
future
future
About The Author