5 Reasons to buy the Moto E Motorola broke the Indian mobile market yesterday when they launched a dual sim smartphone that runs Android 4.4.2 KitKat out the box for a competition mind numbing price of Rs 6999. But a lot of people are still struggling with why and if they should but the newly launched Moto E.

While reasons can be many, iGyaan Breaks it down to the top 5. The most logical explanation is the fact that the Moto E is super cheap. Everyone was hoping for a price under the Rs. 10000 mark, but we got something that is way lower. For Rs. 6999, roughly US $ 120 and Euro 89 you get an impressive device that is carrier unlocked and has excellent build quality and display. The Moto E has the best specifications in this price bracket, A dual core Qualcomm Snapdragon 200 chipset, 1 GB of RAM, 4 GB Storage and 32 GB expandability, a 4.3 inch display with qhd resolution and a 5 MP camera at back, it has all the makings of a powerful budget device including a 1980 mAh battery. The Moto E also has front facing speakers a first after the HTC Boomsound and Xperia Z2, a first for any budget phone. It makes sense doesn’t it? 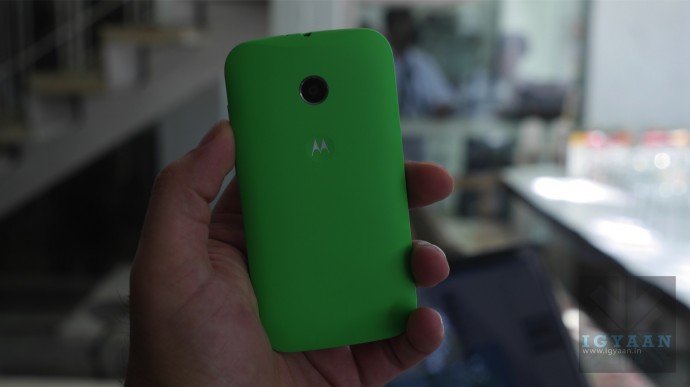 Possible the best built phone you can get for this price (smartphone at least), the Moto E has super rugged shells and Gorilla Glass 3 in the front, it also has a IP coating that makes it splash proof and sort of water resistant. The front also has a smudge free coating on the gorilla glass, and the back panels just like the Moto X and G are soft to touch, very durable and scratch and fingerprint resistant. Sure you get lots of dual sim devices in this price, well in India and other such markets, the Moto E is the best in this price to offer the said feature. Comparing it to similar phones from companies like the Galaxy Trend, the Moto E just stands out on top in various occasions. The Moto E runs Android 4.4.2 out of the box and Motorola is promising updates, heck they are guaranteeing updates to the next version of Android, the next supported version at least. Bonus reason : Did we mention its cheap?

The Moto E is horrendously cheap, not to touch, not to look at but in price. You should get one even if you don’t need it. Its a great carry along phone and will work wonders as a spare device. Will work as a backup phone incase your battery runs out, and for the outdoorsy people, its just a phone that will withstand the elements incase you are worried about damaging your fancy flagship. The Moto E also offers a replaceable “shell” back so change the colours and match your style. If you are using a feature phone, this might be the easiest phone to switch to, and you should switch if you are on a feature phone. (Some Blackberry phones included)

Bharat Nagpal
Founder and Chief Editor of iGyaan. Bharat likes to keep on top of technology ! Follow Him on Google Plus : Google+
You Might Also Like
iG PickLatestMobileMoto
Read More