Sony has been a background player in the smartphone game. They have lost some market in the past and haven’t brought anything out of the ordinary in a while.  The Japanese company has now come with the next in their T series of smartphones. The Xperia T3 looks impressive on the outside but the innards leave a lot to be desired. The box offers the usual. The headset could have been better.

The box comes with the usual inhabitants; the handset, pair of generic looking headsets, charger, micro-USB to USB cable and the documentation. The headsets provided in the box that is available is very average and doesn’t at all say Sony. Design-wise the phone is good to look at. The back panel is made of a gradient or distressed material that makes the phone appealing to hold with its enhanced grip. The exteriors of T3 appear premium, and the 7.7mm ‘thinness’ does make the phone look sexy. Specs wise, the Xperia T3 runs Android 4.4.2 out of the box. It is powered by a quad-core 1.4 GHz, Snapdragon 400 processor with an Adreno 305 GPU. The RAM stands at 1GB and 8GB of internal storage. The phone gives expandable storage options up to 32GB. The device is NFC capable. Compared to its competition and its price, the specs don’t feel satisfactory. The battery on the device is 2500 mAh that can take good care of the phone for about a day.

Display wise, the T3 sports a 5.3 inch IPS LCD screen. The resolution of the screen is 1280×720 with a pixel density of 277 ppi. The annoying part of this device is that even with its massive display it only accepts four finger touch. 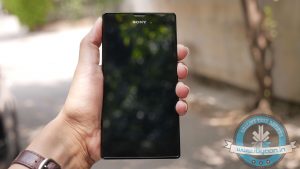 The main camera on the device is 8 MP shooter whereas on the front is rather disappointing 1.1MP camera, which is capable of shooting 720p videos. The dedicated camera button is a welcome feature. The User Interface (UI) is similar to previous generation Sony Timescape UI. There are some decent customization features but overall it is pretty much the usual Xperia experience.

Multimedia experience in the T3 is appreciable. The playback and viewing angles on the display are great. The sound from the speakers is decent and gets the job done, but Sony should have brought in better speakers.

Overall, the device looks like a lazy attempt by Sony and has too little for too much. The phone is priced at Rs. 25,990. The competitors have lot better specs at this price point, and Sony really needs to buck up its game if it wants to be perceived as a worthy smartphone company.

likethis
What's your reaction?
Awesome
0%
Epic
0%
Like
0%
I Want This
0%
Meh
0%
Posted In
Latest, Sony, Unboxing and Hands On
Tags
About The Author

Happy Nagashetti
iGyaan Network's newbie Happy is a Technological Hedonist, Traveller, Photographer, Curious Humanoid and a giant foodie who is always pumped up for new adventures.
You Might Also Like
LatestSonyUnboxing and Hands On
Read More