The Xiaomi Redmi 1S went on Sale for a price of Rs 5999, with a limited 40,000 phones for sale and the phone got the usual response. But is the phone worth the mega hype that it has created? Lets find out!

The Redmi 1S just like the Xiaomi phones in the past has built a burning desire in everyones hearts to own the phone, it comes with an impressive price tag and a good spec sheet. The performance on the phone is excellent and everything just seems to be too good to be true. The Redmi 1S will truly change the market perception for starting – lower end smartphones. The phone runs on a 2050 mAh battery pack, which is replaceable, has dual SIM card slots, one of which is a 3G (GSM-WCDMA) and one is 2G (GSM). The Redmi 1S also has a memory card slot to add a memory card upto 64GB.

The Redmi 1S is a pretty good looking phone, it’s not Moto G, but then it’s almost half the price.  The replaceable back panels give you the ability to give the phone a personal look and feel. The phone is essentially made out of plastic, but in no way does it feel cheap or poorly built. The front has a Asahi Dragontrail glass, which many argue that it is equally good when compared to Gorilla Glass variants.

The buttons are nice and tactile, for volume and power. The touch buttons are responsive and easily reached, they however are not backlit, which is rather disappointing, and difficult in low light situations and at night.  The phone has a good fit and feel in the hand, the edges are soft and the outsides curve to match the shape of your hand really well.

We were surprised to see the performance from this sub Rs. 6000 handset. The UI is fast and responsive and you really cannot complain about the performance of this handset. Usually budget phones end up being turnoffs, however the Moto E changed that in the past and the Xiaomi Redmi 1S tops that by almost double.

With an average of 330 MB of Free RAM available at all times, the Redmi 1S also has a built in app kill switch that frees up the RAM for usage. Overall the phone is capable of delivering more than you can expect from a phone in this budget. Our Benchmark and Gaming video shows you exactly that below.

The Gaming is pretty good too, even though really graphic intensive games will not work on full graphics, the phone is able to handle gaming pretty decently and without duress. You will get good viewing angles, good touch response, and great gaming feedback. Audio from the speakers is a bit low but acceptable.

As far as the Camera is concerned, you will be surprised to see what this phone can achieve. You get the exact same UI from the Mi3 for the Camera app and an excellent 8 MP sensor that does Full HD video, where most struggle to even do video in the first place at this price. Composition of the shot is quick and autofocus is snappy, colours are a bit dull – and contrast is pretty acceptable. We like additional options like filters, HDR and delayed shots all of which works well and intuitively. You also get quick face detection and a zero lag shutter; mighty impressive. 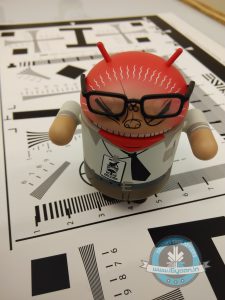 Even though you get an older version of Android, I don’t see people complaining anytime soon. The phone is really fast and responsive and thanks to the awesome MIUI overlay, there are additional functions and shortcuts that one can really learn to appreciate. The version of MIUI is also fairly old, however, there is an imminent update promised for the Redmi 1S to MIUI v6 by the end of the year. You get Google Now style weather updates and notifications, iOS style app layout and folders, and lots of skinning options. All of this with very little load on the RAM and the CPU department, ensuring smooth sailing throughout.

Even though competition is currently offering Android KitKat and more soon, Redmi 1S has the capabilities of holding its own, mostly thanks to the enabled hardware. The future update is expected to free up some RAM on the phone making performance much better, giving you an average of 420 plus MB of free RAM vs the current average of 320-340.

The Phone also has a lite-mode which was initially intended for senior citizens, but however in the indian edition is been designed to give an easier usage experience to the first time user.

Phone networks ar good, but not great. We feel that there is a low network reception indoors with the Redmi 1S when compared to other devices. Outdoors however is great and we have no complaints with audio quality on the incoming or outgoing while on a call.

Battery life is not the best, on an average the phone will run out before end of day, and if you are a heavy user, expect to carry a charger/ powerbank

at all times. Xiaomi is also planning to sell additional spare batteries and external battery chargers.

With the existing battery expect 5-6 hours of real talk time, or a mix of internet usage and apps with 3-4 hours of talk time.

While the Redmi 1S is going to have the same issues like the Mi3, i.e. the lack of available units to sell, service centre issues, Flipkart selling woes, and what not. The Redmi 1S still makes for one hell of a device for one hell of a price, that you can’t beat right now. The hardware is equivalent to devices almost twice the price and performance even better.

The phone is good looking, well built and supported with respect to the OS and UI, with the added advantage of cheap accessories and quick updates one really can’t complain. For the price you will not find a better device, even if you add another 50$.