A month ago, Google Map received the Material Design makeover and revamped the in-app restaurant reservations for good measure (only in the US). Now, a new version is rolling out with much-needed new navigation tools.

Earlier, the update to Google Play services was rolled out by the company. This update brought Play services to version 6.5 and added improvements to Google Maps, Google Wallet, Google Drive and Google Fit. The majority of the update was aimed at Maps, bringing additional features which allowed third-party apps to take advantage of a more seamless integration with Maps. 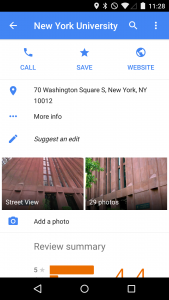 Google maps has always been ahead of the game.

Now, in addition to letting you know exactly how much time that alternate route will save, the app will display estimated time, weather and a smattering of facts about your destination. Google has also added the ability to show and hide traffic with a simple voice command. Of course, there are also some features hiding under the surface and to know that, you have to juggle with the app yourself.

Google Maps 9.1 will also offer improved rerouting options, telling users how much time can be saved by rerouting, and offering ‘route-around’ alerts for closed roads. The application will also offer transit schedule changes for early or late arrivals.

If Google Maps is your go-to app for checking out hotels, restaurants, or scanning other cool stuff, then these new features could save a couple of steps by putting them all in one app. Google is working to make Maps the all-in-one travel and destination tool so that you don’t have to check out competitors like Yelp for information.

The 9.1 version will be rolling out soon to your device, however, the apk for the new version is available here.

Parul Ritvik Sood
iGyaan Network's newbie, Parul is a Writer, Poet, Reader and Mass Communication Graduate with great interest in startups and entrepreneurship.
You Might Also Like
Apps and SoftwareGoogleLatestTech
Read More