Xiaomi added the third device to its India portfolio today. The Chinese electronic powerhouse brought two variants of the Redmi Note to India. The devices will go on sale on the 2nd of December.

As reported earlier, the basic 3G variant will carry octa-core 1.7 GHz MediaTek chipset whereas the surprise offering of the 4G version will sport 1.6 GHz quad-core Snapdragon 400 chipset. The 4G variant is specially made for India, and it has dual-band support for both TDD-LTE 2300 MHz (Band 40) and FDD-LTE 1800 MHz (Band 3).

Being Xiaomi, there was a last-minute surprise in the pricing front. The 3G variant of the phone comes at a price of Rs. 8,999, while the 4G variant will be up for sale at Rs. 9,999. Considering the offering of a superior processor and 4G capability by shelling just a thousand rupees more, it would be advisable to go for the 4G variant. 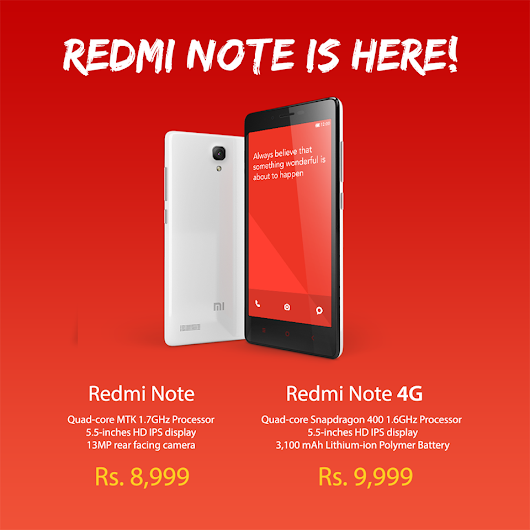 One bit of spec sheet that will tilt the scales even further towards the 4G variant is the expansion of the memory. While the 3G variant gives an expandability option of 32 GB, the 4G variant lets you increase you memory capacity to 64 GB via external storage. So the 4G variant is definitely more bang for the buck.

The USP of the device is its 5.5-inch 720p IPS display. The massive screen coupled with a good processor will put out some great performance. We can safely assume that Xiaomi is going to repeat a vanishing act soon with its third offering for India.

Happy Nagashetti
iGyaan Network's newbie Happy is a Technological Hedonist, Traveller, Photographer, Curious Humanoid and a giant foodie who is always pumped up for new adventures.
You Might Also Like
AndroidBusinessLatestMobile
Read More