Huawei has added some rather interesting devices in its product range. Its recent addition Honor 6 was a unique piece of hardware primarily focused on performance. Now, the Chinese manufacturer has added another device to its smartphone portfolio with the launch of Ascend P7. The company apparently made some bold claims during the P7’s launch event in France saying that the phone can outclass the best of flagships including the likes of Samsung Galaxy S5 and the HTC One. Last year’s release P6 was a gorgeous looking phone but struggled because of an underpowered chipset.

So, has the company rectified its past mistakes and is the P7 the mid-range smartphone that the company claims it to be?

Priced at Rs. 26,990, the P7 is certainly an expensive device from a budget manufacturer. It will be available for sale in the Indian market starting 30th November. To a certain extent, it defies Huawei’s image as a budget manufacturer as the Ascend P7 can be deemed as one of the fanciest phones produced by the company. It may not be as crammed with features like the other flagships, but is it better than other handsets in the same price bracket; we’ll find out.

In comparison to its previous iteration, the Ascend P7’s hardware is cranked up a bit. It has Huawei’s in-house 1.8 GHz Kirin 910T quad-core CPU, Mali-450 GPU and 2 GB RAM on show, which should be up to the task.

At first glance, the Huawei Ascend P7 looks like a blend of the iPhone 4 and the Xperia Z. It’s a neat looking equipment and does feel like a premium built phone while in hand. Its slim form factor makes the phone slip easily into your pocket. It measures only 6.5 mm thick and weighs a mere 124 grams. We were pretty impressed with the way phone looks and feels. It can easily compete with more established flagships when it comes to looks. The overall feel of the phone is quite brilliant. With the right size, it has just the right amount of chrome and metallic accents, subtle logos along with simply laid out buttons. It has a nice minimalistic design and finish, so you won’t feel shy flaunting your device amongst your peers. The front houses a speaker, a light sensor, and a massive 8MP selfie cam. On the bottom, we have a microUSB port for charging, while the 3.5 mm jack rests on the top. The left-hand side has no keys and slots, so the right side houses the microSIM and microSD trays. Along with the trays lays the power button mounted in the centre, very reminiscent of Sony’s Xperia range. A nice metallic finish runs along the side of the device, giving it a more premium look. Turn the phone around, and we see the elegant and subtle non-removable glass back panel with a neat looking finish. 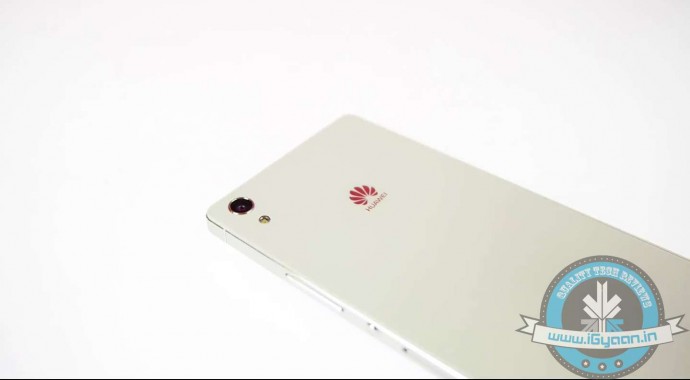 The only downside with design would be the glass back, which makes the device slippery. So, if you have a tendency to slip your phone often, we recommend you to buy a case. In addition, the glass back is made up of very delicate plastic material, which can easily crack. So, make sure you have a case. Apart from that, the design and build of the phone is top notch.

The Huawei Ascend P7 has a 5-inch display with Corning Gorilla Glass 3. It has a Full HD 1080p display, which is quite impressive and is by far one of the best displays we’ve seen. The 5-inch screen is just lovely and bright with good viewing angles, and enough contrast allows users to watch even the gloomiest of flicks with crisp and sharp details. There are no flaws with the display and it was kind of hard to point out a fault with the phone’s display quality. Bright colours and sharp texts coupled with great viewing angles are as good as a smartphone’s display can get, well unless you get a device with a QHD display. The optics on the Ascend P7 are quite remarkable. Both rear and front snappers are a delight, with the primary camera equipped with a 13MP Sony BSI sensor. Shutter Lag time is negligible, while response times are just too good. The auto focus is swift, and colours offer the right depth. Meanwhile, the staggering 8 MP front camera takes care of all your selfie needs. The front camera performs astonishingly well, with end results being more than satisfactory. It also includes a front-facing panorama option for wider shots and selfies. The camera app has the same overlay for its menu found in the Xperia Z2. Main options include a selection of shooting modes, with Huawei’s ‘Smart’ shooting feature coming as default. There are a lot of interesting filters, including HDR, Smile detection and Object tracking with a few minor tweaks offered by the manufacturer. Overall, we were pretty satisfied with the phone’s camera performance. Images rendered were bright and clean and looked superb in full resolution. Have a look at the samples below: While, video mode is not that impressive. It works fine and you’ll be able to record videos but we rather not talk about it.

A blend of advanced hardware combined with fantastic display, multimedia experience on the phone is rather satisfactory. The external speakers position is apt for watching movies and playing games, with sound coming from the centre of the device rather than from the sides. The audio output is quite impressive and should suffice without the need for putting on your headset. It is loud, clear and does not distort even at high volume. The Full HD 5-inch display just takes the whole experience of watching videos and playing games to a whole new level.

The phone’s benchmark scores fall way behind other flagships, but as we know with benchmarks, they do not tell the whole story. It can handle tweeting, making calls, browsing, watching a video at ease without any major hiccups or stutters.

We were a tad worried about its gaming performance looking at the benchmark scores, but boy the Ascend P7 proved us wrong. It ran graphically intensive 3D titles like Asphalt 8 and other games running on full juice without any hassles. The phone’s quite impressive when it comes to daily usage and the fluidity as it performs tasks pretty well and quick.

The Ascend P7 runs on Android 4.4 KitKat with Huawei’s Emotion UI 2.3 skin atop. The first thing Android users will notice is the absence of the app tray. Huawei has removed Android’s two-stage launcher, so all apps rest on multiple pages of the home screen – just like iOS. Huawei has crammed several utilities into folders in an attempt to prevent the home screen look unnecessarily cluttered. But it happened the other way round, it just made the home screen look all the more cluttered. So one needs to get used to things a bit and do some shuffling around to get the desired results. Even the app icons look childish and are not so pleasing.

Meanwhile, the home screen comes preloaded with weather, music, gallery and Google search widgets. There’s also a ‘Me’ module, which apparently can offer instant access to single favourite contact, but it’s rather useless. However, there is a wide array of customisation options, and you can tweak the icons and environment according to your preference. There’s also an option to add a suspend button – a floating launch button with a ring of shortcuts that hovers around the screen. It may come in handy for certain users, offering instant access to utilities like messaging, note-taking, and music playback.

In the Settings menu, Huawei has added two home screen styles, Standard and Simple. While ‘Standard’ is a regular application and widget layout, ‘Simple’ turns your home screen into more of a Windows Phone (adding massive icons to apps and features). It certainly will be useful for the first-time smartphone users or for those who may not have a very good eyesight.

Multitasking in the Ascend P7 is done in the usual Android style, with right hand on screen button popping up a list of recently used apps.

Meanwhile, the pull down notifications tab forms an integral part of the Android ecosystem, and here Huawei has tweaked a bit. A collection of five toggles are housed at the top when you first pull down the notifications, another pull down reveals more controls. These can be customised according to user’s preferences as a seperate menu lets you customise the order in which they appear. All in all, there are no noticeable performance issues apart from a few home screen jerks when the phone was under heavy usage. It’s a snappy and reliable device. Though, users will notice a lot of battery saving notifications popping up time and again, which can be annoying at times. Along with that, the UI is not as standard and intuitive that we see with other smartphones.

Phone network is quite good. We had no issues with the audio quality of incoming or outgoing calls. It latches onto networks quite easily, and we did not experience any call drops both indoors as well as outdoors.

The Huawei Ascend P7 houses a 2500mAh battery, which is slightly less than the Galaxy S5 (2800mAh) and larger when compared to the 2300mAh battery of the Nexus 5. In our battery test, we ran a 90-minute media file on full brightness and with ‘Wi-Fi turned on’. By the end of the video, the battery went from 100% to 71%.

That’s not awful, but it’s neither great too. The battery can easily suffice for a whole day of normal usage.

From decent specs, great camera, awesome display to super sleek and good looks, Huawei Ascend P7 has all the features that you wish in a smartphone. If you’re to judge a phone solely on benchmark scores, the Ascend P7 might put you off but its real time performance is top notch.

At a price tag of Rs. 26,990, the Ascend P7 seems to be a little overpriced. There are a lot of worthy alternatives to consider like the Nexus 5, the Moto X, LG G2, Samsung Galaxy S5 in this price bracket.

The phone’s performance is satisfactory, though it would have been more of a catch if Huawei had created a budget marvel like the Moto G. On the contrary, the company has tried to match up the P7 with other top flagships, and it just falls short.

Had it been priced under Rs. 20,000, it would have been a great alternative to the mid-segment masters.

Abhinav Mishra
iGyaan Network's Newbie, Abhinav Loves Gaming, Cars and Technology, You can Find Him on PSN Bragging About his FIFA Skills.
You Might Also Like
iGyaanLatestReview
Read More