Indians Can Now Watch YouTube Videos Offline on their Smartphones

YouTube received an enthusiastic response when it announced that it will soon facilitate audience with viewing videos offline. The company kept its word and recently launched its offline feature during a press event.

With this new feature, users can watch videos even when offline through the YouTube app. However, to make it possible, one has to first download the video using thier data pack or Wi-Fi. Once the desired video is taken offline, it can be watched buffer-free within the time frame of 48 hours.

Already, we’re seeing over 40 per cent of our traffic in India come from mobile devices. By launching this offline experience on YouTube in India today, we hope to help people move past the challenges of data connection, speed and cost to enjoy a smooth, buffer-free version of YouTube. 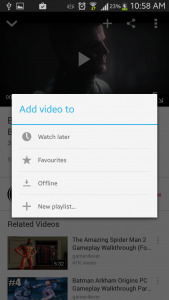 Ajay Vidyasagar, Regional Director of YouTube commented that India is the fifth-largest market for partner revenue in the world. Features like this will just make this stronger. He believes that we could get into the top three markets very soon.

The online video channel has partnered with different music companies and production houses in India like Saregama, T-Series, Shemaroo and Yashraj Films to provide content. The service has also been launched in Indonesia and the Philippines, along with India.

Meenakshi Rawat
iGyaan's newbie Meenakshi handles content at iGyaan. She is an ultimate foodie, loves travelling and likes to read.
You Might Also Like
Apps and SoftwareLatestYouTube
Read More