Samsung will launch the next Galaxy Phone on May 3, in London!

by Bharat NagpalApril 16, 2012
0
Now Reading
Samsung will launch the next Galaxy Phone on May 3, in London!
Browse This Page 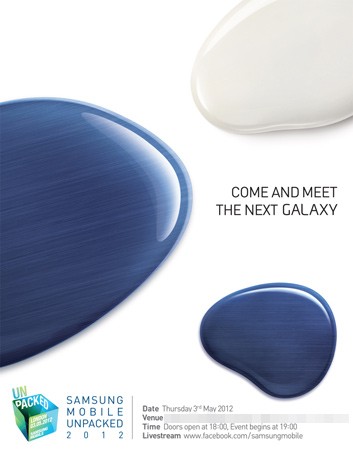 Samsung has officially announced the world will meet the next Galaxy phone in London on May 3rd with this invite, being sent out to various news sites across the world. Almost all rumors point to the release of the Samsung Galaxy S III. The Samsung Mobile unpacked event is usually a birthplace of all great phones from Sammy’s house, including the Galaxy S, SII and even the Note.

It is speculated that the device will have a 1.5GHz quad-core Exynos processor, a 4.8-inch 1080p HD display with a 16:9 aspect ratio, an 8-megapixel rear camera, a 2-megapixel front-facing camera, 4G LTE connectivity, Android 4.0 and a ceramic case.

The image below has also been doing rounds on the blogo-sphere (looks fake to us, what say?).