Aiming to expand the Titanium series, Karbonn has launched its latest handset, the Titanium Mach Two. The phone weighs a mere 112 gms and is sleek at 6.3 mm.

The device is encased with Corning Gorilla Glass 3, which makes it resistant to scratches. The device holds a 5-inch HD IPS display and is powered by a 1.4GHz octa-core processor with 1GB of RAM. It consists of 8 GB of internal storage, which is expandable up to 32 GB via microSD card. An 8MP camera with BSI sensor is equipped at its front and back.

The device is currently available only in deep blue colour and can be purchased at a price of Rs. 10,490. It comes with a free protective silicon case.

With so many reliable, affordable smartphones in the market, Karbonn’s present offering doesn’t seem to stand out. We have a strong feeling it will get lost in the crowd. Xiaomi recently came out with its new Redmi 2, and Motorola too has released its next-gen Moto E. Both these devices hold a similar set of specs and are priced significantly lesser. Other gadgets that can be pitted against the Mach Two are Lava X5 and Yu Yureka.

Check out the specifications of the Titanium Mach Two below:

Rishi Baruah
iGyaan Network's newbie Rishi Baruah is a musician hailing from Mumbai. He plays drums for a Delhi-based band and specializes in Concert Photography. Oh yes, he can cook up a mean four-cheese pizza.
You Might Also Like
KarbonnLatestMobile
Read More 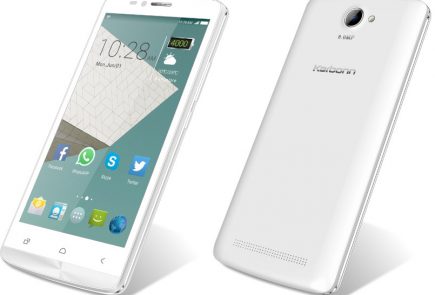