Since the launch of the One M9, the whole world has been conflicted on whether HTC did enough of an upgrade from the One M8 to the One M9. The HTC One M9+ made things more confusing for the buyers and eventually led to unhappiness all round. While the original HTC M9 was launched in the European and American markets, there was more demand in the Asian region and vice-versa with the M9+, which was launched in the Asian market, and had more takers in Europe.

Apart from the name, there are quite a few differences between the One M9 and the One M9+. For starters you have a completely different chipset. While the global M9 is packing Qualcomm Snapdragon the M9+ packs a MediaTek MT6795T. The M9+ does have DUO cameras at the back, just like the M8. However a mix of 20MP+2MP vs the Ultrapixel combo on the M8 or the single 20MP on the M9 makes for better photographic options. Another difference is the way HTC M9+ handles storage, allowing upto a 2 TB microSD to be inserted into the handset and used as storage.

HTC keeps up to tradition with the new HTC M9+ and it’s quite identical in design with the HTC One M9. A brushed two-tone finish with the same all Aluminium back as seen earlier on the M9. The gold trim is easy on the eyes, and even though not everyone has shown a lot of appreciation towards it, the material trip is unique. The front has new-gen Gorilla Glass 4 and a centrally located fingerprint scanner, which may be confused for a main button. 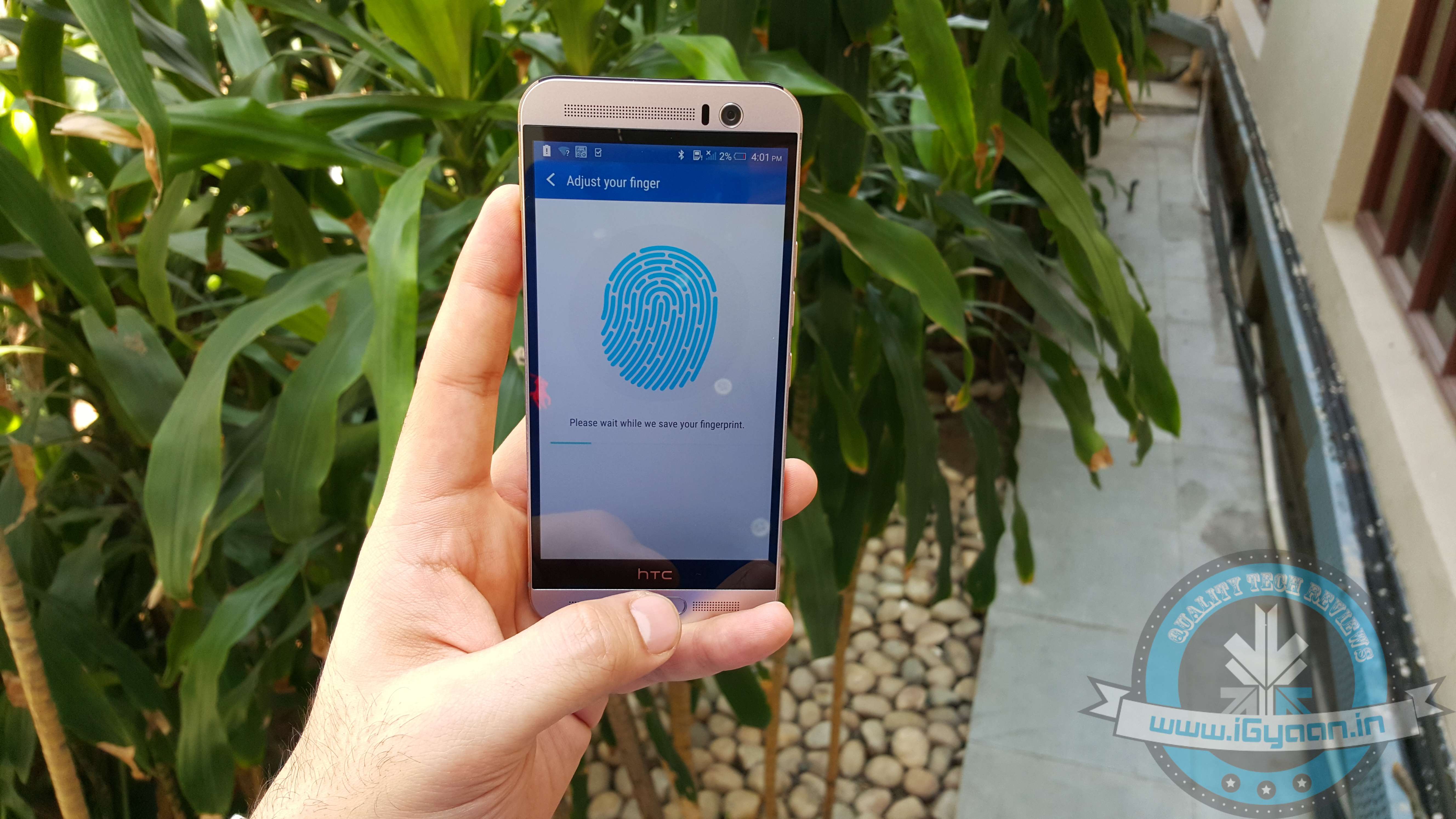 Although, when the phone is unlocked an activated finger would allow you to jump back to the home screen. So it is touch button that looks like a real button with a fingerprint scanner embedded in it.

Hardware wise the HTC One M9+ truly brings it to the table; great cameras, excellent display, ample storage and a large battery. However the Mediatek chipset was a real surprise to consumers and to us alike. This new chipset is actually much better than we anticipated, and puts the M9+ right back up in the flagship league.

The questions around the One M9+ are bang on. Is the Mediatek chipset a mistake? Should HTC have stuck with Qualcomm? Is the performance getting affected?

However the answers are even simpler. HTC found the new Mediatek MT6795T to be refined and powerful enough to power their flagship. We find it difficult to disagree. The processor does not tire, it’s efficient and highly performance driven and allows the user to truly take advantage of the handset. 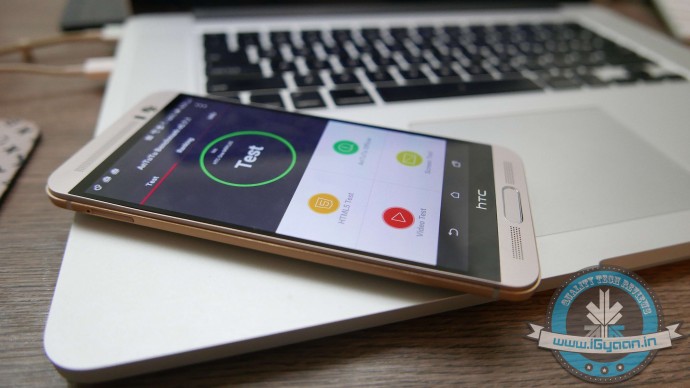 Also, unlike the dual setup of the Qualcomm Snapdragon, the Mediatek chipset comes with an 8 Core CPU.

The HTC One M9+ scores positive results on benchmarks, with a happy 48000+ on AnTutTu 64 bit. The performance report pitches it against all market flagships and gaming performance is better than 85% of the other devices at hand. Gaming is not a problem on the HTC One M9+, the chipset is quick at CPU calculations and load times are highly improved. GPU renders 2D and 3D graphics with easy and most games perform well at high graphics.

It’s a pity that the original HTC One M9 didn’t get a high resolution display. A 2k display makes sense on a handset with over 5 inches to spare, and HTC has managed to get it all well within the sweet spot.   As with most HTC displays in the past, this too gets a SLCD panel with Gorilla Glass 4 and great brightness indoors or outdoors. 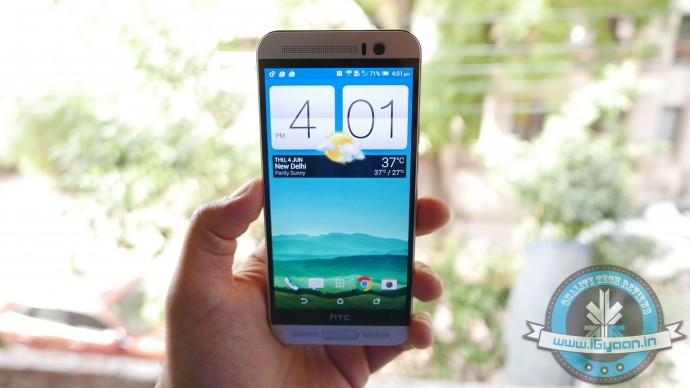 Boomsound is much better on the M9+ when compared to the audio quality of the HTC One M8, larger speaker cavities improve the native sound and an enhanced audio chip improved audio from the headphones. The Boomsound speakers are possibly the industry’s best and they have seen significant improvement on the M9+.

HTC has also majorly overhauled their camera strategy. From saying “Megapixels don’t matter” to stuffing a 20 MP sensor in their latest flagship, HTC has truly gone with what the market wants. A wide f2.2 enables good low light shots, however, the Samsung Galaxy S6 takes the cake on low light with their f1.7 aperture lenses.

The images from the HTC One M9+ are sharp and the colours are well balanced. The contrast is good and the light compensation in low light is excellent. Native image stabilization is hugely missed on this handset.

The Camera app is a lot more simplified and easy to use. While certain things that came naturally on the HTC One M8 are now slightly difficult to operate, like the Dual-Camera capabilities. The addition sensor on the dual setup measures the field of view and allows the user to capture images with defined and adjustable depth. It’s mostly gimmicky, however in a perfect light and area setup, it works flawlessly. An idea example would be a landscape shot with a subject in the foreground. These type of shots will work best and will also allow customisations using HTC’s inbuilt features. ZOE, now independent of the camera app on HTC devices, is more of a cross platform photo sharing app. Important filters and features make it fun to use and allow the user to experiment a lot more with the camera on the HTC One M9+. The front camera is an Ultrapixel camera from HTC, the same sensor we saw on the back of the M7 and the M8 last year. This drastically improves the front facing camera’s quality as well as low light capabilities.

One of the best things HTC has done on the M9 and the M9+ is reduce their control of the Android OS space. The new HTC Sense 7 is a lightweight skin vs what it used to be in the past. Less customisations by HTC also mean that Android Lollipop and Android M (in the future) get to display their full glory.

If you do miss customizations, like HTC’s flip clock, they are now included in the widgets section and are just a simple long tap away. You also, still get themes which you can further customize, by changing colours, images and layouts.

Blinkfeed has also upped its game, with a faster re-hash of feeds and a better layout. The higher resolution display of the M9+ helps in highlighting the content.

The OS and the UI elements are highly optimized, this helps improve productivity and reduce battery consumption.

The HTC One M9+ supports LTE networks as well as all bands in India. It has a fantastic antenna and excellent voice quality, something that has become synonymous with HTC in the past. No dropped calls and hit network in places with poor reception, are great things to have.The reduced search for strong network also improves battery life on the handset. Both the speaker and microphone are loud and responsive, allowing parties on both sides to communicate effectively.

The 2840 mAh battery is more than sufficient in getting through the day and then some. The chipset along with the optimizations on the software front make the battery-drain end up on the lower side of the spectrum. The battery life could have been better and things like fast charge are missing from the mix, we honestly don’t mind.

With the One M9+, HTC has put all its cards on the table. Their experiment with a relatively newer chipset manufacturer may have paid off well. Consumers in Europe are craving the One M9+ while being served the One M9, and there is good reason for that. The M9+ turns out to be a much better handset than many already in the market, it also is a much better handset than the company’s own M9. Excellent build quality, great design and aesthetics, premium materials, great hardware and excellent cameras make the HTC One M9+ a better device. The camera improvements will satisfy those that missed it last year, and the OS improvements will really push the envelope on making the One M9+ ownership worthy.

The One M9 was a huge disappointment, failing to play catch up with what was happening in the industry. However, with the new M9+, HTC not only caught up, they set precedent.