The moment has arrived, when Apple finally reveals its iPhone 6s smartphone. We have been covering all sorts of rumours and reports about this handset the moment we got wind of it. Price, display, specifications and software – we’ve heard it all, and now is that moment of truth where we find out what this hype is all about and most importantly, whether it’s been worth it. Their opening statement is this:

“The only thing that’s changed is everything.” Few exciting things we now know about the new iPhone is that they will feature animated wallpapers and that the Rose Gold colour variant we were anticipating is here! Now it’s up to you if you think rose gold is fashionable enough for you, because the ‘cool’ new iPhone definitely thinks it is.

It comes with a brand new glass encasing this time, with the Ion-X and not the usual Sapphire Glass, and a new Taptic Engine which can be used to navigate the UI. So, it was said that the new iPhone will have an updated 3D Force Touch technology – meaning that the sensors would be taking into account three different types of touch rather than two. This is also true. Apple has confirmed the 3D Force Touch feature, that makes  photos, emails, Messages, etc pop up on your display. You just need to press on an app to jump right into a feature. This feature also allows you to use apps and be active on them without even opening them.

They’ve also mentioned that the phone will be running on the new iOS 9 and the smartphone will come integrated with the new A9 chip. Let’s talk about something that the iPhone is most applauded for – its camera. The iPhone 6 Plus has had an 8MP camera with an optical image stabilization feature that made it the phone with game changing photography abilities. Well, the iPhone 6s is better than that – it has an all new iSight 12MP camera with deep trench isolation. That’s it. iPhone just won. The 12MP camera will now allow you to record videos in 4K resolution.

That was the rear camera, but the iPhone’s front camera, which is as big a star as the primary camera, now comes at 5 megapixels and full HD resolution, allowing better FaceTime and selfie opportunities to users. The front camera also comes with a true tone Retina Flash feature. The 3D Touch feature also extends itself into the still camera pictures by animating the photos into video, called Live Photos, which can also have sound.

“These are regular photos — we extend the capture moment just before and after.”

Speaking about connectivity the iPhone 6s comes with 2X faster WiFi and 23 LTE bands. They’ve also mentioned that the new iCloud storage pricing will be as follows: 50gb for 99 cents a months, 200GB for 2.99/mot 1TB for 9.99/mo. Now in the midst of all this they’ve also announced a small little ‘neighborly app’ that allows Android users to switch to the iPhone’s iOS.

“You can recycle your Android phone for free at any Apple Store,” says the app.

To conclude, we can accumulate all the major features and say that the iPhone 6s comes with the 3D Force Touch technology, is made with a 7000 series aluminum body and a new cover glass, a 64 bit A9 chip with M9, a second gen touch ID, has an advanced LTE and faster Wi-Fi, 12MP iSight camera with 4K Video, 5MP FaceTime HD resolution with retina flash and Live Photos. Phew. 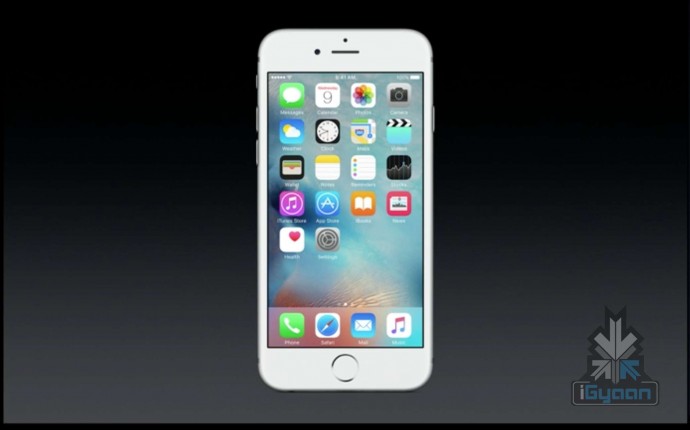 For now, that’s that about the iPhone 6s. Stay tuned. Here are the specifications: