In the world of technology, there is no space for redundancy. Technology is getting updated time after time since tech fanatics are always carving out the next great gadget. The major number of brains swell up for innovating and creating such devices. Gadgets are continuously upgraded and tweaked, but some do not turn out as planned.

We will see some of the weirdest patents filed by the biggest tech powerhouses today: In 2011, Nokia signed a patent for the first vibrating tattoo. Yes, a vibrating tattoo that alerts users when their phone is ringing. According to the official patent, the apparatus would be able to detect a magnetic field and transfer a ‘percievable stimulus’ to alert its users about an incoming call, text ot dead battery.

But for some people, getting inked for the sake of technology was too much. People said the device plunges into a ‘creepy territory’. In an era of iPhones and Android devices, what would be the cost of unplugging a permanent tattoo?

Nokia never discussed anything about the tattoo including the potential health risks. Google, in 2012, signed a patent that would enable the search giant to base advertisements on background noise. According to the patents, Google would install sensors on handsets that would detect temperature, humidity, sound, light or air distribution near a device and ads would be served accordingly.

For example, if you are at the gym and make a call, Google will be able to catch the gym machinery in the background and then serve up adverts for home gym equipment.  If it is 30 degrees or more outside, Google will throw in adverts for sun cream, air conditioning units or ice creams.

But it raised the question of privacy. People were not pleased with the idea of Google tracking down their location wherever they went. Although from the use and productivity aspect, this patent was quite useless. Amazon came up with this idea in 2012 for a protective system for mobile phones. The patent describes a system that utilizes a gadget’s built-in gyroscope, camera, accelerometers and other onboard sensors to decide if the device has entered an airborne state. If it has, the technology will release airbags to decrease potential damage – or possibly even alter the trajectory of its fall by firing jets of air.

But this idea gathered much criticism like ‘What’s next, smartphones with built-in parachutes? Or maybe handsets with wings and propellers?’ and ‘From a logistical point of view, the handset would have to be rather big to hide an airbag.’

There has been no track of progress regarding this airbag. Let’s wait and find out! Imagine a situation where you have to pay more for skipping an ad while watching a movie or watching a sporting event and you have to pay extra for accessing the replay. Luckily, this patent did not fly off as imagined by Microsoft when they filed this patent back in 2004. This wasn’t very welcomed by the masses because these charges would be on top of the base price as a way to boost up profits. 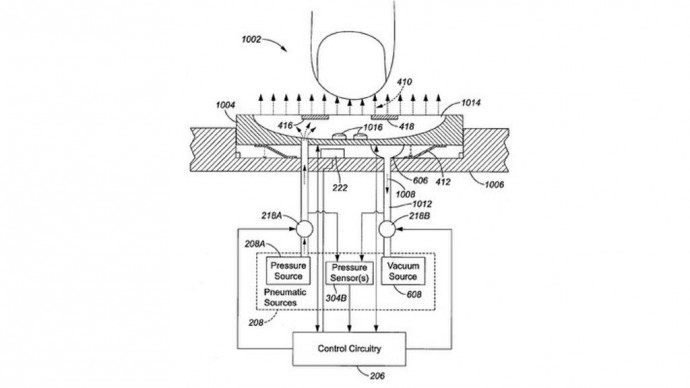 It isn’t too hard to imagine a flat keyboard without keys- we don’t really look at our fingers when we type, ourselves. But, it’s still a little hard to imagine actually using one. In 2011, Apple patented a unique keyboard design that uses micro-perforations to shoot air at the user’s fingers upon touch, giving tactile feedback to whoever is. One of the biggest objections about virtual keyboards is the lack of tactile feedback, making it much laborious to touch-type at any speed, with much accuracy.

Rishi Baruah
iGyaan Network's newbie Rishi Baruah is a musician hailing from Mumbai. He plays drums for a Delhi-based band and specializes in Concert Photography. Oh yes, he can cook up a mean four-cheese pizza.
You Might Also Like
AmazonAppleGadgetGoogle
Read More