by Bharat NagpalAugust 13, 2015
9
Now Reading
Here is What’s New in The Galaxy Note 5 vs The Note 4
Browse This Page The Galaxy Note 5 is the newest Flagship for Samsung. The phablet category maker that changed everything for Samsung gets an overhaul, it also is a change in the way Samsung thinks design. Last year the Note 4 was a Samsung first too, when the Phablet saw an Edge variant and a metal framed body construction. Learning heavily from that and the uber-success of the S6 in global markets, the Galaxy Note 5 is an all new metal and glass clad flagship for the company and prospective buyers will be pleased. Samsung does also bring the flaws of the Galaxy S6 into the mix. Many have disliked the non removable battery and non expandable store on the Galaxy S6 and the Galaxy Note 5 also lacks in the same areas. Samsung brings an all new Gorilla Glass 4 front and back to the Note device, with coloured glass panels as seen on the S6 and S6 edge. Last year’s Note 4 took a more traditional Samsung approach of the leather look back panel seen on the Note 3 and Galaxy S5. This year the more premium looking Samsung Galaxy Note 5 will grab all the attention prior to the next iPhone launch, especially because that is what the company was gunning for. Samsung seems to have liked what they did with the Galaxy S6 and the S6 Edge, as they bring the same Octacore chipset as on the S6 and S6 Edge onto the Note 5. The LPDDR-4 RAM and newer camera optics, all of which are shared by younger siblings the Galaxy S6 and Galaxy S6 Edge, have also been added to the Note 5 (the Note 5 gets 4 GB RAM). The Note 4 was run on Snapdragon chipsets, and with instability issues, Samsung chose not to use the Snapdragon chipsets and rather went with their own chipsets on the Note 5 as well.

The inclusion of colour options on the Note 5 means that Samsung is now targeting a wider array of prospective buyers, especially those who have loved the gold and blue variants on the S6. While the company had chosen a more traditional black and white approach last year with the Note 4. 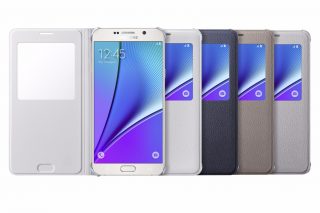 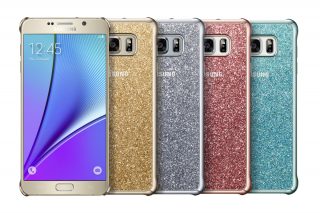 This years Note 5 will also see cover options and accessories all of which are built to highlight and use features like the new S-Pen with ease. The S-Pen is also new, with a click mechanism at the back that lets you easily mount and unmount the pen from the Galaxy Note 5. The S-Pen software features are also improved with a simpler UI and a dark scribble note mode which basically lets you scribble a note when the screen is turned off.

What is also new in the Note 5 when compared to Note 4 is Samsung Pay, a transaction system designed and made to run with virtually all credit card machines globally. This will currently be launched in the US and Korea and will later be available to the world.