Narendra Modi in Silicon Valley: Could ‘Digital India’ Be a Reality?

by Rosheena ZehraSeptember 28, 2015
4
Now Reading
Narendra Modi in Silicon Valley: Could ‘Digital India’ Be a Reality?
Browse This Page

PM Narendra Modi’s visit to Silicon Valley, against the backdrop of campaigns like Digital India and Make in India, has the whole country aflutter with hopes of potential developments in the Indian tech scene. Aimed at promoting the spread of tech-literacy all over the country, the visit includes Modi meeting the CEOs of tech giants. Needless to say, the development of events led to some important announcements. 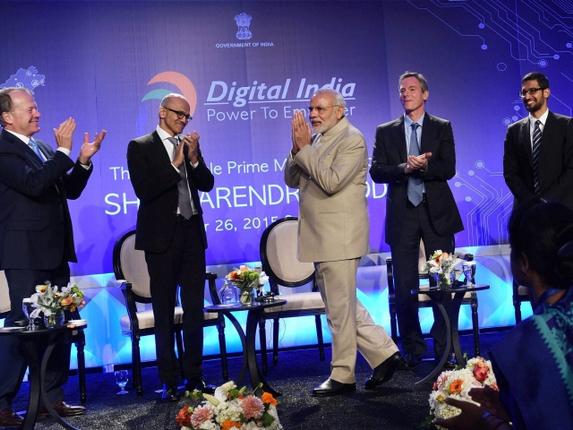 Google: Modi met Google CEO Sundar Pichai yesterday and discussed plans on introducing Wi-Fi connectivity across 500 railway stations in India, with speeds good enough to stream HD videos. Modi said that Google plans on covering 100 stations by the end of 2016. “We are expanding our public Wi-Fi hotspots. For example, we want to ensure that free Wi-Fi is not only there in airport lounges, but also on our railway platforms. Teaming up with Google, we will cover 500 railway stations in a short time,” he said. Pichai also announced that Google will roll out 11 Indian languages for Android users to type in next month.

Great honor to welcome @narendramodi to Google today and support his plans for #DigitalIndia https://t.co/xD7vq7Qzah

Microsoft: Satya Nadella announced that Microsoft would use its cloud services in India. “We believe low cost broadband connectivity coupled with the scale of cloud computing and the intelligence that can be harnessed from data can help drive creativity, efficiency and productivity across governments and businesses of all size. This is turn will create global opportunities for India,” Mr Nadella said. A significant part of the first day of the PM’s visit to Silicon Valley was spent with two CEOs, Tesla’s Elon Musk, and Apple’s Tim Cook. The meeting with Musk was structured with the aim of securing company’s “Powerwall” invention for the Indian tech world. Powerwall is a long term storage device for solar energy capable of bringing “energy to hitherto unserviced areas of India”.  This innovation is expected to include more than just solar energy, and hopes to explore alternative energy sources as well. Tim Cook, the CTO of the company, spoke about India and said, “India has a special place in the heart of every Apple employee for the simple reason that Steve Jobs, when he was young man, went to India for inspiration and it was what he saw in India that infused in him the desire to create Apple.”

Valuable interaction with @tim_cook on a wide range of issues. pic.twitter.com/hpZlCtfioG

Apple sees immense potential for app development in the country, especially for young entrepreneurs in the field. Following the example of China, where the company has managed to give rise to about 15 lakh jobs, Apple’s involvement in India seems a huge leap for the Digital India campaign.

After a one-on-one meeting with Facebook founder and CEO, Mark Zuckerberg, Prime Minister Modi shared the stage with him for a 50-minute discussion on technology, social media and Digital India. Zuckerberg mentioned how India has shaped Facebook’s history by providing a market of millions of netizens all connected through the social media platform. The PM made a comment good humouredly and said, “We used to have elections every five years. Now we have them every five minutes.” Zuckerberg showed his support for the Digital India campaign by updating the picture on his Facebook page with a tri-coloured display picture.

The PM returns from Silicon Valley on 30th September with immense promise for the country in the realm of internet and technology. A sense of anticipation would perhaps be natural at this juncture as we await the execution of these plans. If seen till the end, a larger proportion of the country’s population would have access to internet services and those already using the internet would have smoother, faster services. Hopefully the UN is listening next time it decides to conduct a poll of internet services in the country.