by Sanket VijayOctober 6, 2015
1
Now Reading
RoboHon is a Tiny Robot Phone That is All Kinds of Adorable
Browse This Page We bring you news straight from Japan, and it’s tech related. So yes, it has something to do with robots. But this time its not just any robot. It’s Japan doing what it does best – making a smartphone that looks like a cute little robot. 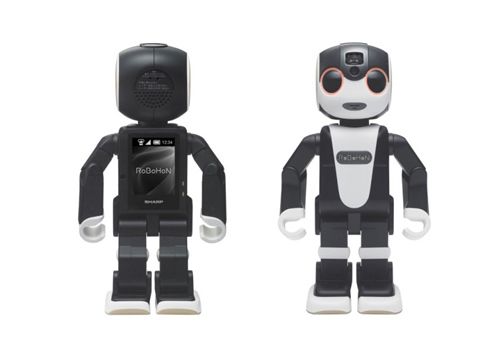 Move over, Pepper, there’s a new robot in town and it’s called RoboHon. This tiny robot smartphone is the latest creation announced by Sharp and designed by Tomotaka Takahashi, and it is jammed full of skills and features. If you ever decide to leave your sleek and thin smartphones for a bipedal robot phone with arms and legs and a mouth, then this is what you need. You’d also need to move to Japan for it, but that’s besides the point. RoboHon is an 8-inch robot with a 2-inch screen on the back  and a camera and projector built into its face. This phobot (phone + robot) can walk, talk, dance, raise its arm to get your attention, and can also connect to LTE and WiFi. RoboHon has facial recognition, and voice recognition built-in too. So it can identify people and act accordingly, telling them they have a new message or to smile for the camera. You can also set reminders and RoboHon will respond like Siri, though a lot less creepy. It also promises to be there to cheer you up when you’re feeling blue.

Now, this robot phone is not exactly going to be easy to fit in your pocket, and is the complete opposite of how other smartphones are evolving, but hey, its still an adorable looking robot, so that’s reason enough to bring a smile to your face. Sharp says it will release RoboHan in Japan in the first half of 2016. Watch the video of the multi-purpose, joyful tiny bot below. We’re sure it’s going to be the best thing you’ve seen all day.

Sanket Vijay
When not indulging in reading or writing, Sanket fanboys over The Flash, Star Wars, Coldplay, and U2. And pizza, he loves his pizza. Follow him on Instagram for more.
You Might Also Like
LatestLifestyle
Read More