Founder and CEO of Facebook, Mark Zuckerberg, has planned out his next trip. According to his recent post on Facebook, Zuckerberg will be visiting India on October 28. He will arrive in New Delhi at 12 pm and will host a Townhall Q&A at the Indian Institute of Technology.

Zuckerberg has not stated the duration of his stay and if he’s planning on visiting other parts of the country, yet. 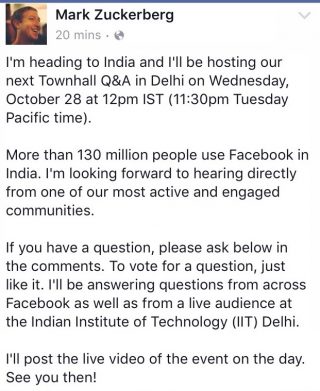 Zuckerberg also mentions in the post that India is one of the most active communities on Facebook with over 130 million users. He has invited Facebook users to post questions in the comments section that the people in India would like answered during his Delhi visit. He says that he will “be answering questions from across Facebook as well as from a live audience at the Indian Institute of Technology (IIT) Delhi.”

Within an hour since his post, people have already begun posting questions, some of which are related to the benefits of Internet.org in rural communities and ways in which Facebook can help better the lives of people in India. If you have any questions, be sure to leave a comment below his post.