Samsung Officially Launches the Galaxy On5 and On7 Smartphones

by Sanket VijayOctober 23, 2015
2
Now Reading
Samsung Officially Launches the Galaxy On5 and On7 Smartphones
Browse This Page Lately, we’ve been hearing a lot about Samsung’s newest budget phones, the Galaxy On5 and On7. The devices were briefly listed in the companies website a few days ago and we understood some specs of the devices. Samsung has now officially launched the phones and here’s what we know.

The On5 and On7 are pretty similar to each other and are equipped with a 1.3 GHz 32-bit quad-core Samsung Exynos 3475 processor paired with a Mali-T720 MP1 GPU and 1.5 GB of RAM. The phones come with a really low 8 GB internal storage, but are expandable up to 128 GB via MicroSD slot. 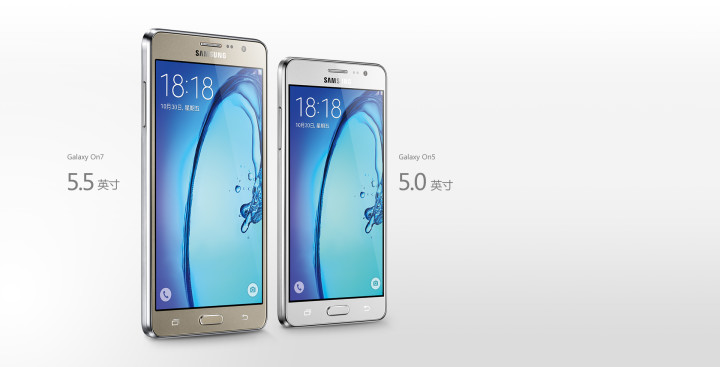 The Galaxy On7 and the Galaxy On5 feature 5.5-inch and 5.0-inch Super AMOLED display, respectively. Another point of difference between them is the camera. The Galaxy On5 has an 8-megapixel rear camera while the On7 houses a 13-megapixel sensor rear, and they both sport a 5-megapixel front. Meanwhile, the On7 has a bigger 3000mAh battery compared to On5’s 2,600mAh. Samsung has in all likelihood cut down on bloatware for the two devices seeing as it comes only with an 8 GB internal storage. However, even with reduced bloatware, an 8 GB phone will be a tough sell for buyers. One will have to wait and see how people take to Samsung’s new phones.

As far as pricing is concerned there has been no word on it yet, though the expected prices stand at $150 for the On5 and around $200 for the On7. The phones are expected to launch in markets outside China in the next few months.