Facebook founder Mark Zuckerberg announced that he and his wife would be giving twenty million dollars to the non-profit organization called EducationSuperHighway. This NGO helps provide high-speed internet to public schools in the United States of America. 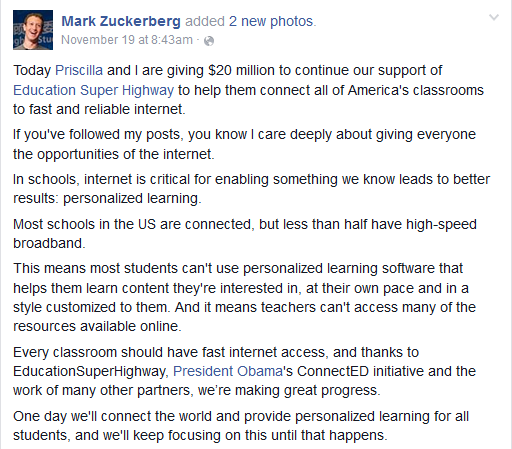 Research suggest that there are more than a bunch of schools in the country that have access to internet connection, but not high-speed broadband. Therefore, most teachers and students don’t use the computer in their classroom for personalized teaching during the instructional hours because it is counterproductive.

“In schools, Internet is critical for enabling something we know leads to better results: personalized learning,”- says Mr.Zuckerberg.

Contributing towards educational endeavors is not something new for the couple; they had previously also donated three million dollars to the same foundation in 2013, and plan to start their own educational endeavour called The Primary School by August next year. The new project will be spearheaded by Priscilla Chan and strives towards bringing together education, quality, youth, and family health care for the people involved.