For the first time ever, DJI will be brining its hand-held camera into the Indian market. The company today unveiled the DJI Osmo, which uses DJI’s signature three-axis gimbal stabilisation technology that eliminates the problem of shakiness that goes with traditional cameras.

“DJI consistently refines the way cameras move in space – whether they are in the air or on the ground,” said Michael Perry, DJI’s Director of Strategic Partnerships at the Mumbai launch event. “With the Osmo, we have created a camera specifically designed to capture a smooth moving image regardless of filming conditions.” The Osmo comes standard with  a 4K, 12MP camera with a 1/2.3-inch sensor and a 94-degree field of view lens. It is also compatible with DJI’s Zenmuse camera series. The Osmo is all about controlled shooting. It’s main USP is that it provides a smooth video experience. The trigger allows you to toggle between multiple modes of operation.

“Traditional handheld cameras are either shaky, or require bulky stabilizers that are difficult to set up,” Perry continued. “The Osmo moves the experience of handheld filmmaking from capturing what happened, to sharing expressive, smooth video that shows what an experience was like.” 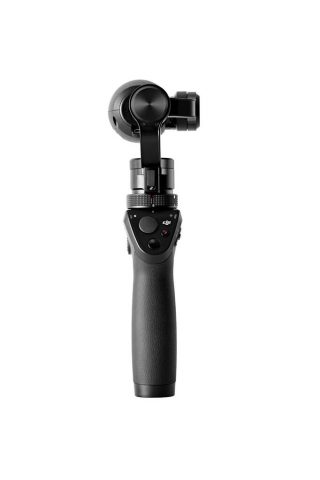 The Osmo comes with these smart filming functions:

Panorama – Take a picture and the camera will automatically pan around 360°, taking and stitching overlapping photos to create a panorama shot.

The Osmo also comes with additional accessories such as a tripod, extension rod, bike mount, universal mount and a straight extension arm.

The Osmo is available in India in 10 key cities including Mumbai, New Delhi, Bangalore and Chennai, and will also be available through direct shipping anywhere in the country. The camera is priced at Rs. 69,990.