Xiaomi Mi Note 2 Has a Snapdragon 821 and Dual Cameras

by AdityaTOctober 21, 2016
12
Now Reading
Xiaomi Mi Note 2 Has a Snapdragon 821 and Dual Cameras
Browse This Page Xiaomi has launched really exciting products in 2016 but the company is no where near stopping.

Leaks of the new Mi Note 2 from Xiaomi have the world excited. According to the new images, the Mi Note 2 will have a 5 inch 2k QHD Super AMOLED display manufactured by LG and not by Samsung. The display will also showcase force touch or a 3D touch interface much like the iPhone 6s and 7 according to the image, but it could simply be the under glass fingerprint sensor. 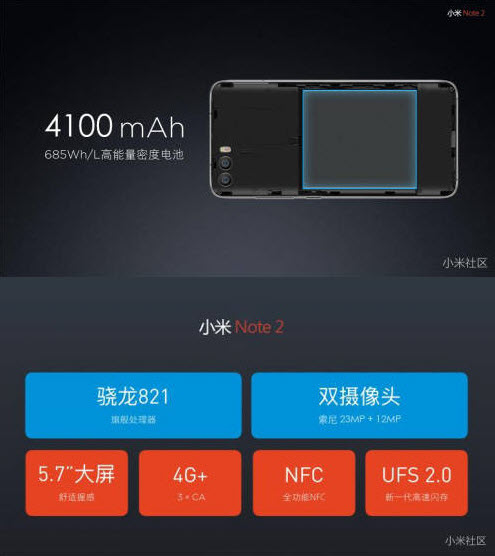 The Mi note 2  will be based on the Qualcomm Snapdragon 821 SoC much like the Google Pixel. Varints will allow users to decide RAM and Storage combos of the device, between 4GB + 64GB and 6GB + 128GB.

There will also be a 4100 mAh battery with Quick Charge 3.0 support over the USB Type-C port. Like previous leaks indicated the phone will also have dual camera modules with one 23MP Sony IMX318 plus the 12MP Sony IMX378. If you are already missing the IRIS scanner from the Note 7 the Mi Note 2 will have that too.