Samsung Galaxy S8 and Galaxy S8+ : Everything We Know So Far

by Bharat NagpalMarch 12, 2017
1
Now Reading
Samsung Galaxy S8 and Galaxy S8+ : Everything We Know So Far
Browse This Page
Share via

Samsung may be hard at work readying their next big smartphone/s but the world can hardly wait. These are possibly the most leaked Samsung smartphones till date, and whether one agrees or not, Samsung has some serious flagships getting ready to face the world. If leaks have told us anything, the Samsung Galaxy S8 and the Galaxy S8+, will both have impressive displays, cameras and internal hardware. Let’s quickly do a roundup of everything we know so far. Samsung has taken a new approach towards design this year, while the aesthetic of the Samsung Galaxy S8 and the Galaxy S8+ will remain identical to the edge variant of the Samsung Galaxy S7 edge, the phones will be dominated by the display. Samsung has had to remove the physical button from the front of the phones, which also means that the fingerprint sensor will be removed from the ideal front location to a rear location next to the camera module.  Samsung will most likely retain the IP68 aspect of the Galaxy S7 on the Galaxy S8 and S8 plus, which was one of the biggest reasons for Samsung’s success with the Galaxy S7. The Samsung Galaxy S8 and Galaxy S8+ will both have curved edge displays, with a QuadHD+ resolution. However, the screen to body ratio on the new phones will be more than 85%, letting the display rule the front of the phone, eliminating unnecessary bezels and including from the top and bottom of the phone.

We also know from leaks that the Galaxy S8 and the Galaxy S8 plus will have curved corners of the display. We have already seen this with the LG G6, where the company claims the rounded edges make the display survive better in cases of drops and prevents it from cracking at the corner.

Samsung is also said to be working on a 3D Touch type of technology that will allow the user to press down on the display to mimic the home button or open contextual menus.  The displays of the upcoming Samsung Galaxy S8 and the Galaxy S8 Plus are also expected to support S-Pen input, so the Galaxy Note fans don’t have to wait for the company to launch the Galaxy Note 8. Looks like there is no special magic trick this time around. While Samsung had one of the best cameras on smartphones in 2016, the company may not make big changes to the cameras on the Galaxy S8 and Galaxy S8 plus . Both the phones will be fitted with 12 MP sensor equipped main cameras with a Dual Pixel technology and the ability to shoot 4k video. Despite the fact that Samsung has an impressive chipset, the Exynos 9, which is capable of heavy multitasking and shooting 4k video at upto 120 fps while supporting a 4k display. Samsung may just save all that power for the Note 8 and since the South Korean tech giant has placed the largest order of the Qualcomm Snapdragon 835 chipset, it is highly unlikely that Samsung will have an Exynos variant going out to market. There are also no leaks or reports that suggest otherwise.

Samsung will also stick to 4GB of RAM and not jump the gun with 6 GB which at this moment seems like overkill by all standards, despite the fact the OnePlus 3/3t have it, there is not much use for it in real world applications.

Samsung has learned a lot from the Galaxy Note 7 battery failures, and even though the company just shrugged off the cause and problem of the batteries in the Note 7 devices. Samsung has designed a new 8-point program to ensure battery safety. What Samsung will also do is a leave space around the batteries themselves allowing for certain expansions, which would print a battery puncture, that may be caused by hitting some other component inside the phones.

The Qualcomm Snapdragon 835 Chipsets support the latest Quick Charge 4 which is capable of offering 5 hours of usage in just 5 minutes of charge. Samsung may not leverage this feature for their upcoming Galaxy S8 and Galaxy S8 plus as rapid charging degrades the battery, and Samsung cannot afford another battery fiasco. Samsung may stick to adaptive fast charge offered by Galaxy S7 which is more in like with Quick Charge 3.0 standards.

Since Samsung will remove the physical home button from the upcoming Samsung Galaxy S8 and S8+, a virtual home button will take palace on the front around the center of the bottom portion of the display. If the phones do support a 3D Touch type interface, the virtual button could simply be a placeholder for the press point to go back to home.

Samsung is also working on a new virtual assistant called Bixby, said to launch with the Galaxy S8 and Galaxy S8 plus. Leaks have also shown off an additional physical button on the sides of the phones, which remains different from the power and volume button. This is possibly a direct launch button for the Bixby assistant. However the Samsung Galaxy S8 and Galaxy S8+ will support the Google Assistant out of the box, which would cause confusion as to which assistant you should use on your phone. 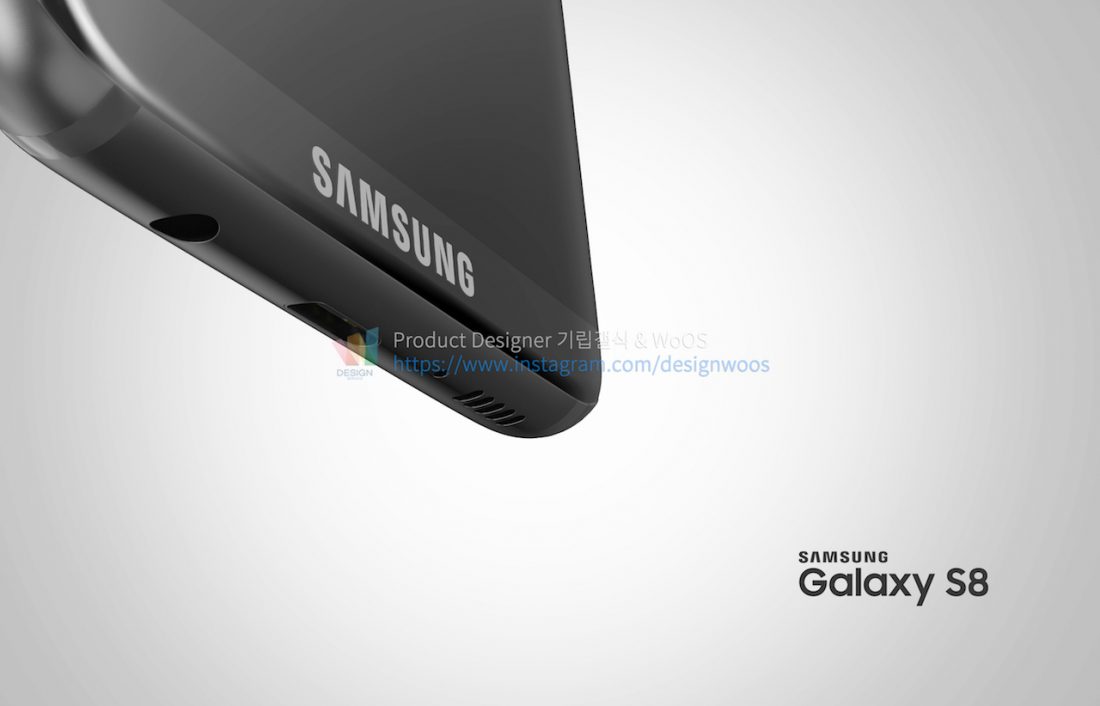 The Samsung Galaxy S8 and the Galaxy S8+ will have a USB C port of charging and syncing and will also retain the 3.5 mm headphone jack. Samsung may not be ready yet to explore removing the audio port as a large audience of it’s buyers may not be ready for the switch. Leaks also suggest that the audio will be tuned by AKG, and there is a high possibility that the Galaxy S8 and Galaxy S8+ with come bundled with AKG earphones as well.

Samsung will also retain the Iris Scanner seen in the Galaxy Note 7 as a new security standard in the Galaxy S8 and Galaxy S8+. meaning users will be able to lock certain files, folders and apps, along with their phones with a simple retinal scan. The Samsung Galaxy S8 and Galaxy S8+ will most likely launch with Android 7.1 along with Samsung’s own layer of Touch Wiz type interface which will allow for things like Briefing to sit on the left of the home screen. This will also allow for Samsung Knox security, S-Pay and the whole array of Samsung Apps to work with the phone. Samsung has cleaned up the UI in the past and the Galaxy S8 is expected to launch with a slight redesign to the look making it cleaner and more minimal. Samsung has confirmed that it is holding a launch event on the 29th of March in New York city, it is traditionally where Samsung launches the Galaxy S series phones. Samsung may also however launch other products at its event, like the improved Gear VR headset designed to work with the new smartphones, which does come with a new controller and a new design.

In markets like India Samsung will hold launches as early as second week of April, to launch and announce the phones.

Samsung will retail two models of Both the Galaxy S8 and Galaxy S8+, for markets like US and Canada Samsung will sell a single SIM card variant with a second slot for micro SD card expansion of the storage. The second variant will allow for two SIM cards on a hybrid setup, i.e. it will either accept two SIM cards or one SIM card and one microSD card. Initially Samsung was supposed to start selling the Galaxy S8 and Galaxy S8 plus mid April, the date has now been shifted to April 29th and may further be shifted to early may. Reports indicate that Samsung wants to run additional tests before launching this phone to prevent any Galaxy Note 7 type failures.