Tesla Unveils An Electric Truck And A Sports Car Tesla, the American automaker headed by Elon Musk, has unveiled two new electric vehicles at an event held in Hawthorne. The company revealed a new electric car, the Roadster and an electric truck, the Semi. Not a lot was revealed in terms of specifications about both the vehicles but, Elon Musk said that Roadster will go into production in 2020 while Semi, the e;ectric truck will go into production in 2019.

Musk claims the car will rocket zero to 60 miles per hour in 1.9 seconds, the first production car to perform the feat in under 2 seconds, Musk said. Musk did not confirm the top speed of the Roadster but hinted that it will be over 250 mph. The new sports car is priced at US $200,000. “It’ll be faster than that jet over there,” Musk quipped, as an airplane soared over Tesla’s Hawthorne, California facility. Musk said the Roadster had a 200 kwh battery pack and a 620-mile range per charge, or over 1,000 kilometres. Imagine driving to Los Angeles to San Francisco, and back, without recharging, Musk teased. The car has three motors, one in the front and two in the rear, all-wheel drive and torque steering. Elon Musk had teased a “self driving electric truck” for a long time. He finally took the stage to unveil the product, the Tesla Semi Truck. The Truck is extremely smart, Musk claims. Surround cameras minimise blind spots, Tesla said. The trucks will be equipped with enhanced autopilot and other self-drive and safety features such as automatic emergency braking, automatic lane keeping and lane departure warning. Musk claimed incredible levels of safety and reliability. There are onboard sensors which will look for signs of jackknifing. The Truck has four engines, so even if you break two, it will still keep motoring for a million miles. 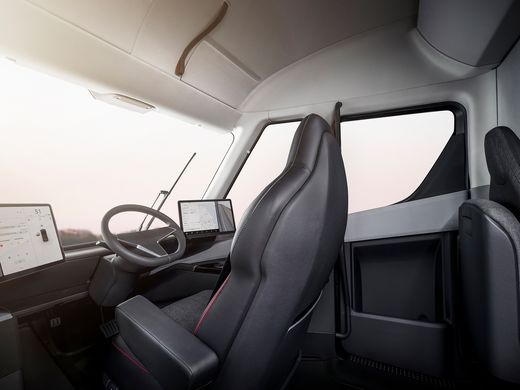 Even though it is far from consumer ready as the company will start working on it in only 2019, Musk claims that it will be worth the wait. According to Musk, on a 100-mile route, a diesel truck would cost $1.51/mile, while this truck will cost just $1.26/mile. Musk claimed the Tesla Semi would go from 0 to 60 mph in 5 seconds compared with 15 seconds for a diesel truck. He also said it would climb a 5%-grade hill at 65 mph, compared with a diesel’s 45 mph. Vipul Vij
Always found in a Hooded Shell, Excited by technology, tortured by his eating habits. Handles content at iGyaan.
You Might Also Like
LatestTechTesla
Read More