Razer Phone Could Be Heading To India Soon

by Vipul VijNovember 23, 2017
1
Now Reading
Razer Phone Could Be Heading To India Soon
Browse This Page Razer, one of the most famous gaming hardware makers in the world recently launched the Razer Phone. It is a phone, that company claims is made for gamers and has some of the best specs in the market. At its launch, it was priced at US $699 and it has now arrived in Asia at a higher price of US $790.

While we founded Razer in California, US, I’m a Singaporean still and I’m very excited to make Singapore the first country in Asia to release the Razer Phone.

A lot of global phones first enter other Asian markets before launching in India. India recently surpassed the US as the second largest smartphone market in the world thanks to the growing population and cheaper internet plans. To believe that Razer will launch the phone in India is not a far-fetched thought. The price of the Razer Phone in India, however, will be crucial for its success in the country. The smartphone has a 5.72-inch IGZO display with 120Hz refresh rate which reinstates that the phone is targeted at gamers. Another interesting aspect here is the front-firing dual speakers. With bezels getting thinner, the trend of front-firing stereo speakers appears to be dying as well. The Pixel 2 XL managed to squeeze in stereo speakers with slightly larger bezels that its competitors. The Razer phone has bezels similar to a Sony smartphone with front-firing speakers with Dolby Atmos sound and amplifiers which are certified by THX.

Under the hood, the Razer Phone has the Qualcomm Snapdragon 835 chipset, 8GB of RAM and 64GB onboard storage which can be expanded up to 2TB via microSD card. The Razer Phone will come equipped with special games which are specifically reprogrammed with a 2K display and 120Hz refresh rate like Tekken, Legend Of Valor and more.

According to Tom Moss, Razer was able to use the technical know-how accumulated over many years in heat dissipation for the Razer Phone. A heat pipe and two-layer heat spreader ensure that the smartphone does not overheat in continuous use and under full load. Bad news for fans of the good old headphone jack, because the Razer Phone doesn’t have a 3.5mm jack on the phone itself. To connect analogue headphones, there is a USB type C dongle, which has a THX-certified DAC inside. The fingerprint sensor is housed inside the lock/unlock button. 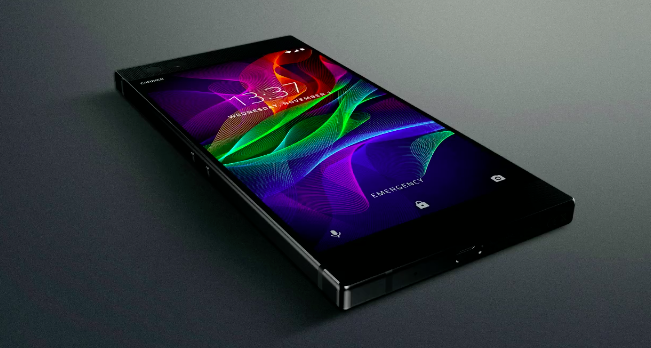 The device is powered by a 4000 mAh battery and runs Android 7.1 Nougat.