Xiaomi is expected to put up an impressive showing at MWC 2018. Along with smartphones, the company could also unveil the Surge S2, its second custom chipset after the Surge S1. The confusion arises when we look at what Xiaomi could unveil and what the rumours point at. A month ago, there was barely any chatter about the Mi Mix 2S to ever be launched.

But, it is becoming increasingly possible that the Chinese smartphone maker could announce the Mi Mix 2S and not the Mi 7. After a few sketchy leaks, the Mi Mix 2S has shown up in an official Xiaomi banner which states the important specifications and the official design of the device. The first thing that grabs your attention is the design of the Mi Mix 2S and it will surely turn a few heads at its launch. 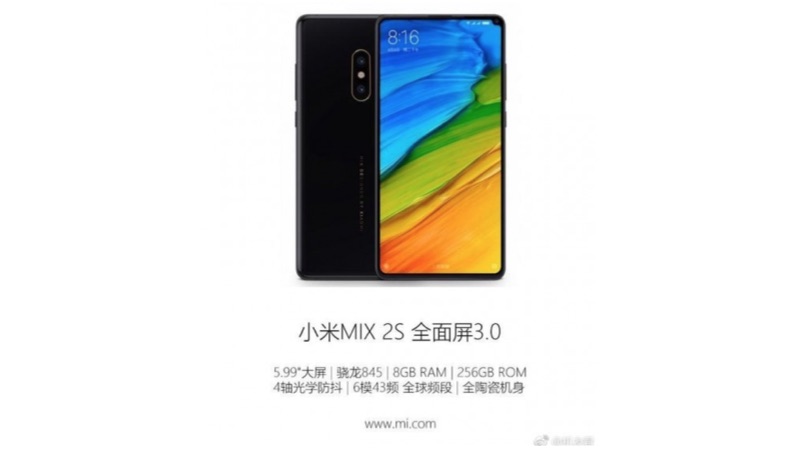 On the front is where Xiaomi will look to one-up the much-famed Samsung Galaxy S9 and S9+. The leaked image confirms that the Mi Mix 2S will have a different take on the “notch.” The bezels all around the display will be uniform but, the top right corner will protrude a bit and that will house the front-facing camera.

As we all know, the Samsung Galaxy S9 and S9+won’t look very different from their predecessors. This means that design-wise, Samsung won’t have much to show, and that is where the Mi Mix 2S could excel. A lot of smartphone makers will skip MWC because of the popularity of the Galaxy S devices but, Xiaomi could grab a lot of eyeballs with the launch of this smartphone.

Apart from the design, the image also reveals that the Mi Mix 2S will be powered by the latest and greatest Qualcomm Snapdragon 845 chipset coupled with 8GB of RAM and 256GB onboard storage.