Samsung has been in the news for the much-anticipated launch of the Galaxy S9 and S9+. While the marquee launch has grabbed everyone’s attention, a new Galaxy device, the Galaxy C10 Plus has started doing the rounds on the internet. Samsung and its Galaxy C series have seen a bit of success in the India market. The Galaxy C7 Pro was a good device and a lot is expected from its successor. A few days ago, the Galaxy C10 Plus showed up, revealing a few key specifications. The smartphone in question carries the model number SM-C9150. According to the listing, the alleged Galaxy C10 Plus will be powered by the Qualcomm Snapdragon 660 chipset. Along with 660 chipset, it will have 6GB of RAM and run Android 7.1.1 Nougat.

Now, a few concept renders of the Galaxy C10 Plus have been released. The design of the Galaxy C10 Plus stunning and different from what we’ve usually seen from Galaxy smartphones. The smartphone has the shape of an old Galaxy smartphone but, the edge-to-edge display makes it look modern. The very thin bottom bezel also houses a very small home button that will have a fingerprint sensor in it. 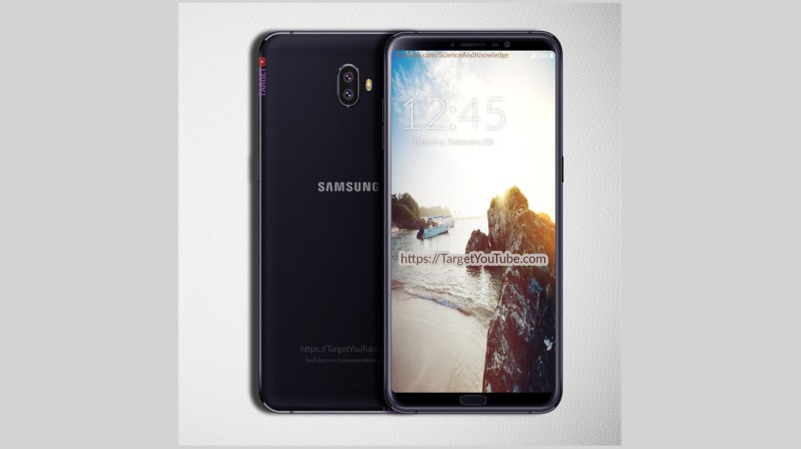 To the back of the smartphone is a vertically placed dual-camera along with an LED flash. Unlike a lot of other OEMs, Samsung will not follow Apple’s footsteps when it comes to the positioning of rear-facing dual cameras. Just like the Galaxy Note8, and upcoming Galaxy S9+, the dual-cameras are positioned in the middle of the device. The antenna lines are very similar to the Galaxy C7 Pro.